Home > Featured > “My faith is really just part of my identity”

“My faith is really just part of my identity” 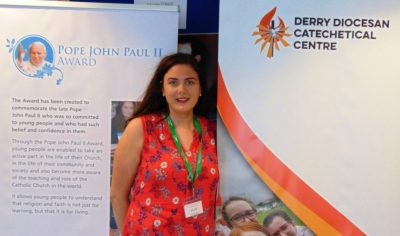 The Diocese of Derry’s new diocesan youth coordinator has said she aims to help young people see the value of the Church and challenge some of the wrong information they have gleaned from the media.

Twenty-two-year-old Lizzie Rea is a theology and history graduate from Maynooth and a former youth volunteer at the Derry Diocesan Catechetical Centre.

She discovered she loved youth ministry work through her stint as a volunteer at the Derry Diocesan Catechetical Centre and she now feels her mission is “to try and get young people back into the Church by helping them to see its good points and its value, and try and give them some of the experience I had growing up.”

She added, “I was very fortunate in the faith experiences that I had.”

Born just outside Glasgow in Scotland, her family lived there until she was 11 years old when they moved to Inishowen in Co Donegal. Generations back, her family actually came from Donegal before moving to Scotland.

“My maternal grandparents were both from Glasgow but they met in Buncrana. My father’s family were from Lurgan. My great-grandfather was Italian and his wife was Irish.”

“Most of my family are practising Catholics. My mum and grandmother were the major faith influencers in my life. I remember my mum dragging me to devotions in May, and to Adoration, and during Lent we went to 8am Mass. From I was very young, I went to Lourdes in the summer on pilgrimages with adults with special needs, along with my mum who was a group leader. Then, when I became a teenager, I went to Lourdes at Easter to help out, so all of this was a massive influence on my faith development.”

“My faith is really just part of my identity. Where I came from you were a Celtic supporter and a Catholic and, if you had Irish ancestry you were an Irish Catholic. Catholicism and Celtic go hand-in-hand when you are in an Irish community in Glasgow. My brother was an altar boy and he and my parents always went everywhere that Celtic played.”

She admits that there were times when she was growing up when she didn’t want to go to Mass.

However, a visit to Medjugorje as a university student changed her faith and helped her come to terms with her grandmother’s death which was a stumbling block on her faith journey.

After graduating from Maynooth, the time she spent volunteering at Derry Diocesan Catechetical Centre resulted in her getting a job as a youth parish worker at St Eugene’s Cathedral in Derry.

“I realised through my work as a youth parish worker that I wanted to do youth ministry work, because I loved it.”

She has been in the role as youth co-ordinator for Derry Diocese since August. “I am using everything that I learnt through my degree and I love it.”

“I am working in the Catechetical Centre with the Diocesan Pastoral Youth Leader, Yvonne Rooney, as part of the youth team, which involves me with the Pope John Paul II Award participants, the Diocesan Youth Ambassadors and also the Derry Youth Community, as well as with all the parish youth leaders.”

Through her role, Lizzie Rea is also involved in school retreats and with the recent launch of the GIFT (Growing in Faith Together) programme in parishes for Year 8s.

Youth events coming up in the Diocese are a sleep-out for charity in February, a climb of Croagh Patrick and a pilgrimage to Medjugorje in the summer.