Home > Featured > “Faith should leave you challenging yourself” – Archbishop Martin

“Faith should leave you challenging yourself” – Archbishop Martin 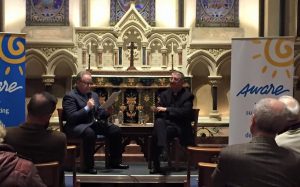 Archbishop Diarmuid Martin being interviewed by Patsy McGarry of the Irish Times in St Patrick’s Cathedral, Dublin as part of the Aware Resilience Series of talks held in conjunction with Veritas. Pic courtesy: Lynn Glanville.

It is very difficult as a priest to celebrate the funeral Masses of your parents, Archbishop Diarmuid Martin of Dublin has said, as he recalled the deaths of his mother and father within months of each other in the same year.

In a question and answer session with Irish Times journalist Patsy McGarry, which was held in aid of Aware’s support services for those suffering from depression and feeling suicidal, the Archbishop said his mother’s death came as a complete surprise.

His father was in hospital at time dying and the young curate was asked by medical staff not to reveal to his father that his mother had passed away as it would have undermined his health. His parents died when they were just 68 and 69.

“Coping with dying isn’t easy,” Archbishop Martin acknowledged and said for the person facing death, “It must be terribly lonely to die in the midst of medical equipment.”

He said he and his brother had faced their loss together and that would have made his parents happy.

He also recalled being in warzones such as Burundi, where shootings and bombings had taken place. At a hospital there he had come across nuns tending to a five-year-old girl recovering from an attempt to behead her.

“Her grandmother was sitting by her bedside; she had resilience; these are the things that have influenced my faith.”

Speaking in St Patrick’s Cathedral in Dublin at an event sponsored by Veritas, the Archbishop said his faith encapsulated three things: the dignity of every person as God created them; that God created us as a family and we must give expression to that in the way we live; and that God gave us a home on earth which we must care for.

He said faith must bring these three elements together rather than focusing on one or other of them alone.

“Faith is important to me. I have my own simple, inadequate faith. But faith can also become a comfort zone in which people can move away from the realities of life. Faith can damage people. The Church created people who are guilt ridden and scruple ridden and that is not what faith in Jesus Christ is about. Faith should free people,” he commented, referring to some of the nasty letters he has received over the years from those who claim he is not doing his job.

Speaking about some of the things he would like to have done better in his years as archbishop, he said he would have liked to have had a better relationship with his priests, as there were times when he hadn’t understood their challenges.