Home > Featured > Faith and counselling helped me cope with Columbine

Faith and counselling helped me cope with Columbine 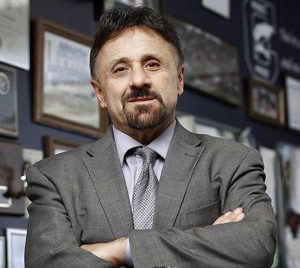 The principal of Columbine High School where 14 students and a teacher died in a shooting tragedy has said that counselling and his faith were what helped him cope with the traumatic events and aftermath of 20 September 1999.

Frank DeAngelis, who will speak at a fundraising event next week in Dublin for Jigsaw – the National Centre for Youth Mental Health, came to prominence as the principal who stood with the school and rebuilt a broken community after the shooting.

The day after the Columbine shooting, a friend advised Mr DeAngelis to get professional help and he got help immediately.

“I’m still in counselling. There are times when I’m re-traumatised,” he told RTE’s Ryan Tubridy.

His second support was his faith.

“I am a strong person of faith,” he said. “I was raised a cradle Catholic. I can remember two days after the tragedy Fr Ken Leone called me down to the Church and there were 1200 people there and he whispered in my ear something that allowed me to continue. He said, ‘Frank you were spared on that particular day. Now you need to go and rebuild that community. You will not have to walk that journey alone’.”

Fr Leone told the Colombine principal that the road would be tough. “There’s going to be days when you are saying ‘Why me, why me?’ But God will be with you.”

Mr DeAngelis said talking to a professional counsellor helped him to come up with coping skills.

People who have been traumatised or who suffer with mental problems often believe it is enough to talk to a spouse or close friend.

“If you were to break an arm would you allow your wife or your husband or your best friend to cast it or surgically repair it?” is his response.

He also believes that parents must be parents and not their childrens’ ‘best friends’, and they have to be ready to intervene.

“I get this thing [from parents] all the time: ‘My son or my daughter has certain rights.’ You need to be a parent. If you need to go into their rooms and see what is going on, or see who their friends are – then you need to do that. That is the role of a parent.”

“So many times I’ve had parents say ‘I can’t do that. It is violating a right’. But I say ‘By doing something like that, you are taking a strong interest in your child’s life, you may be saving their life’.”

Frank DeAngelis will be the guest speaker at a public event, Frank DeAngelis – Lessons learned: in conversation with Jigsaw’s Tony Bates raising funds for Jigsaw – the National Centre for Youth Mental Health at the Mansion House in Dublin next Wednesday 14 September from 6.30 to 8.30pm. Tickets cost €25.

During the conversation, Mr DeAngelis will cover topics such as the importance of being present and staying involved as parents, even when adolescents tell us we’re not needed; staying in touch with the role of social media in young people’s lives; how to spot the often subtle signs of a young person in distress and the role of self-care in our work on behalf of young people.