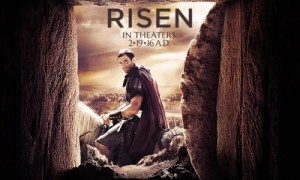 Risen – “the most important manhunt in history” opens in forty-one Irish cinemas next Friday 18 March.

The film tells the epic biblical story of Christ’s resurrection, as seen through the eyes of a non-believer, Roman military tribune Clavius, (played by Joseph Fiennes) and his aide, Lucius (Tom Felton).

They are tasked with solving the mystery of what happened to Jesus’ body in the weeks following the crucifixion in order to disprove the rumours of a risen Messiah and prevent an uprising in Jerusalem.

Released in mid-February in the US, the film grossed $24 million at the box office during its first two weeks, and finished the third highest grossing movie in its first weekend.

Directed by Kevin Reynolds, it runs for 107 minutes and carries a 12A certificate.

The film was initially intended as a mystery/thriller and “unofficial sequel” to The Passion of the Christ set to depict the events surrounding the 40 days following Christ’s resurrection.

“Avoiding alienation from the sacred source material without, on the other hand, declining into a lazy stance of believers-versus-the-world piety can be a tricky business,” writes John Mulderig in a review of Risen for the American Bishops Conference.

“But the makers of the Resurrection-themed drama “Risen” (Columbia) have pulled it off to splendid effect.”

“Where Ryder, an artist, is impeded by his pleasure-loving sophistication, Clavius (Joseph Fiennes), the Roman tribune at the heart of ‘Risen’ is too battle-weary and blood-soaked to entertain any easy hopes for the world. So the execution of Jesus (Cliff Curtis), which he witnesses almost accidentally, makes little impression on him.” 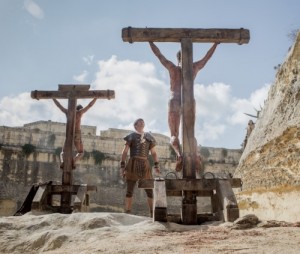 The reviewer says Reynolds’ script is “an unusually effective big-screen treatment of the origins of Christianity” and he pays tribute to Joseph Fiennes’s performance as the “solitary, combat-haunted warrior whose relentlessly practical outlook offers nonbelievers a ready path into the story of the Resurrection”.

Despite grim scenes of armed conflict and crucifixion, he believes the “faith-bolstering benefits” of the film will “likely  sway the parents of mature teens in its favour”.