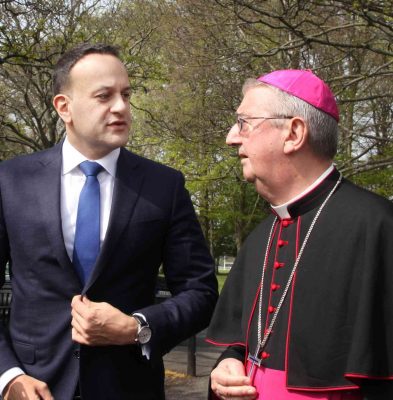 The government’s first structured dialogue meeting with faith representatives at Dublin Castle on Thursday lasted three-and-a-half hours and focused on faith-based education as well as inclusive and diverse communities.

In a statement, Archbishop Diarmuid Martin of Dublin, who represented the Bishops’ Conference, said the discussion was based on topics previously submitted by participants.

Archbishop Martin said he welcomed the opportunity to discuss the role of faith in the context of modern society, as well as the broad range of views that were offered and facilitated by the gathering.

The meeting was chaired by the Taoiseach, Leo Varadkar. Twenty-eight separate religious and ethical groups participated in the dialogue.

In his address to representatives from churches, faith communities and non-confessional organisations in St Patrick’s Hall in Dublin Castle, the Taoiseach recalled how ten months ago Pope Francis had been welcomed to Ireland.

In the same room, Mr Varadkar had suggested to the Pope that the time had come to build a new relationship between religion and the State in Ireland – a new covenant for the 21st century – in which religion is no longer at the centre of the State but continues to have a real and meaningful role to play in Irish society.

He said the structured dialogue was part of that work and it built on his meetings with the Catholic Church two years ago, and with the Protestant Churches last year.

“I believe open, transparent and regular dialogue is the best way of establishing that new relationship, one that recognises the things we have in common and respects our differences,” the Taoiseach told the assembled delegates.

In a new covenant, he said, “we should be influenced by our history but not bound by it. Liberated from the past instead of its prisoner. In Ireland we have an opportunity to create a new relationship protecting religious freedom while also respecting the rights of all. Ensuring fair treatment for all.”

He said the representatives’ interests and concerns extended beyond questions of faith and included the biggest challenges affecting the country: housing, Brexit and climate change.

Describing Ireland as a country of faith, spirit and values, the Taoiseach said, “We aspire to build a Republic based on family, community, enterprise, social justice, diversity, openness to the world, equality before the law, and individual liberty. These are values we all share, values which unite us.”

He added that he was very proud as Taoiseach of the fact that Ireland is now one of the most diverse countries in the world, and one of the youngest.

“We see the value of religion and faith-based organisations every day all around us. For example, through the various faith-based charities and voluntary organisations that do so much good work in our communities.”

He stressed that any new covenant – any new relationship between the State and the churches – should be about pluralism rather than absolute secularism.

“That means, for example, greater choice for parents in education through the availability of more Educate Together schools, community national schools and Gaelscoileanna. It also means the divestment of some existing religious schools to the community sector should parents want that. It doesn’t mean the complete secularisation of education.”

He acknowledged that the prospect of divestment can give rise to concerns but added, “I believe we can alleviate these concerns if we handle this sensitively and in a collaborative way. The objective is to provide the choice desired in some places by some parents. The prospect of choice does not denigrate in any way the invaluable contribution of various churches to the education of Irish children over many generations.

“It simply recognises that in the more diverse Ireland of the 21st century many parents want a greater choice about where to and how to educate their children.

“We must also recognise that a choice of schools may not be possible or practicable in all areas, so we need to have regard to the views of majority as well as minorities.”