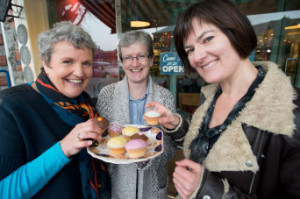 Pictured at the launch of the Dominican Sisters’ Alzheimers Cafe, Cabra was Fair City star Rose Henderson (right) with Sr Edel Murphy, OP, (centre) and Sinead Grennan, CEO Sonas APC. The new Alzeimhers Cafe will be hosted by the Dominican Sisters on their campus in Cabra and will take place on the first Thursday of the month from 7pm-9pm for people with dementia and their families and carers.

Fair City star Rose Henderson, who stars as ‘Val’ in the popular soap, was on hand on Thursday to launch a new Alzheimer Café in Dublin.

The new café brings the total number of Alzheimer cafés across Ireland to thirteen, located in four areas of Dublin, and one in Kildare, Sligo, Wexford, Tipperary, Cork, Carlow, Kilkenny, Meath and Wicklow.

The Alzheimer Café is free of charge and depends on volunteers who run the evenings.

Rose Henderson has given her support to the project because of her personal knowledge of the condition which her father suffers from.

In fact, she attended the opening of the first Alzheimer Café in Ireland in Donnybrook in 2012.

The new Alzheimer Café is being provided by the Dominican Sisters Cabra at the Dominican Campus on the Navan Road and will run on the first Thursday of every month.

The Alzheimer Café is a concept that was originally developed in the Netherlands as a monthly support group in a café-like setting for people with dementia and their carers.

It’s an unusual type of support group, combining information and support with an opportunity to socialise in an informal environment.

It enables families who are experiencing dementia to receive valuable information and stay connected.

Alzheimer Cafés are also attended by healthcare professionals and are combined with a presentation on an issue relating to dementia.

The model encourages other interested groups to set up an Alzheimer Café in their area, according to the criteria of the original model.

There are an estimated 48,000 people with dementia in Ireland.

The founder of the Alzheimer Café in Ireland, Sinead Grennan, CEO of Sonas aPc commented, “We’re delighted that see this new Alzheimer Café opening in North Dublin. The several hundred families who have attended our Alzheimer Café say it’s an invaluable resource, support and social outlet at a very difficult time in their lives.”

She said the talks give practical advice on issues like dealing with a diagnosis, how and where to go for help and advice on how to live well with dementia.

“Plans are now underway to set up a national network of Alzheimer Cafés, so that we can link in with each other and support new groups wishing to set one up in their locality,” according to Sinead Grennan.

Gerry Martin, CEO with the Alzheimer Society of Ireland, commented that the cafés offer a warm and welcoming space for people with dementia along with their family and friends to meet and share experiences, learnings or just have a chat.

“It is a very important resource for people living with dementia to have in their local community. The popularity of the Alzheimer Café model is evident by the numbers in which they are growing all around the country,” he said.

Dominican Sr Edel Murphy, who headed up the committee to establish the new Cabra café, said it would assist the people of the surrounding area so that “they can benefit from practical support and assistance in facing dementia together.”

The first Alzheimer Café was started in 1997 in the Netherlands by Dr Bere Miesen.

He was frustrated that health and social care students were not taught more about the invisible (emotional) aspects of having and living with dementia (eg fear, anger, helplessness, stress, long-term grieving, guilt, adapting coping and communication, and difficulties admitting to the need for and asking for help).

That meant that people received some types of help, but were missing out on support for some essential issues.

He decided to try to change this and invited people he knew, and anyone else interested, to attend the first ‘Alzheimer Café’ at the University of Leiden. Since then, the concept has been developed in a number of countries including the UK and Ireland.

The first Alzheimer Café in Ireland was set up in Donnybrook in 2012.

Amongst the topics for discussion at the Alzheimer Café in Donnybrook include ‘Living Well with Dementia’; ‘How is Dementia Diagnosed’; ‘The Caring Role and Who can I turn to for help’.