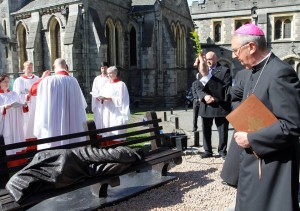 Archbishop Diarmuid Martin of Dublin has warned that the country is faced with a growing housing crisis which, despite attempts to coordinate an emergency response, is not getting better.

In his homily at a Mass to mark the centenary of Back Lane Hostel in Dublin, the Archbishop said that credit must be given to Government and to housing agencies for their work especially in the emergency response at the beginning of this year.

However, he added that there is no way it can said that the response to homelessness in Dublin is “on track”. The facts say something different.

He expressed serious concern over the effects of a probable increase or ramping up of house repossessions.

During the upcoming tourist season, many hotels currently used to house the homeless will no longer be valuable he warned and added that all of this indicates that “in the coming months existing services will experience enormous strain and many of those entering homelessness will be children.”

He underlined that conscience, public opinion and political commitment must be alert every day.

“The problem is complex and cannot be resolved overnight, but we can never settle back into thinking we have done enough or that the emergency is over.” The Archbishop of Dublin added, “It is not.”

In his tribute to Back Lane Hostel, Archbishop Martin said it has been an important institution in the capital for one hundred years.

The hostel, which is set on a quiet corner near one of the busiest traffic intersections in the city, is a place where solitary and lonely and wounded men are received quietly, with human warmth rather than with publicity.

“It is a place where men who know real hardship and harshness in their lives, come and experience a tenderness they may not have known for years, a tenderness which helps them to re-discover themselves.”

“It is a place where men receive not just food and a shower and a blanket and a bed, but above all a place where they re-find their dignity,” the Archbishop said.

Elsewhere in his address on Saturday, Dr Martin said the name of Saint Vincent de Paul is a byword for men and women who identify and reach out to the poor.

“We thank God for all those men and women inspired by Vincent de Paul over the past 100 years” and still respond today to the needs of the homeless in our city and contribute to the proud history of Back Lane Hostel.

Noting that the country is in the midst of all sorts of celebrations and centenaries, as we approach 2016 and almost a decade of celebration reflecting on the founding of the Irish State and the consolidation of its institutions, the Archbishop noted that Back Lane’s centenary goes back to 1915 and to a situation of poverty and homelessness in a city which was at the same time a prosperous city of business and commerce and culture.

He remarked, “The statistics about homelessness at that time ring a note that is very familiar to us today. The number of the homeless was high, compared to the smaller population of the time.”

“I was stuck by the sudden spike in numbers in 1926, when we would have imagined that the new State would have been able to begin to put in place a strong social policy.”

“That is striking enough, but even more striking is that, as you report: ‘there were more people sleeping rough in Dublin last winter than in the street count taken in November 1925’.”