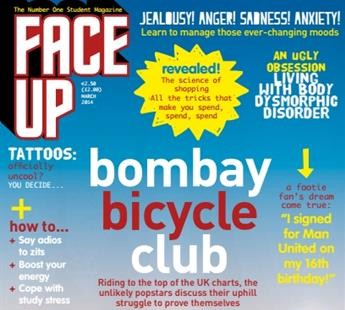 Face Up magazine has published its last print edition after 14 years.

A new website with content from past magazines and some new articles is expected to be up and running by the new school term in September.

The teens magazine which is published by Redemptorist Communications had been subsidised from the start.

But the cost of production had increased in recent times while subscriptions declined.

“We just knew that the way schools’ budgets are going there is no money there for Face Up as a resource. We subsidised it from the word go, and were happy to do so, but with costs up and subscriptions down, it wasn’t viable any more,” Paul Copeland, business manager, told CatholicIreland.net.

“We couldn’t reduce the page count, or the quality of the paper, the artwork and the time it took to design. I think the product would have been somewhat diminished,” he added.

He explained that the other Redemptorist publications are doing well, especially the flagship magazine Reality. There may even be the possibility of putting a youth supplement into that a few times a year. “That is something we are debating at present,” he said.

Face Up was the brainchild of Fr Gerry Moloney and he has edited it from the beginning.

Louise Hilton and Michelle Garnett have also been part of Face Up for a long time as have the ‘backroom’ team at Redemptorist Communications. They will remain working on the Face Up website and other projects.

One of their tasks is to prepare suitable content from Face Up to go on the newly designed website as a free resource for schools, youth workers, parishes and teenagers.

“The feedback about the printed version of Face Up has been positive, warm, and people are disappointed it is going but they understand why,” Paul Copeland said.

“By doing our website we know that these resources will be available, and they will be widely welcomed especially in schools where they are thirsting for it, particularly for the RE curriculum, as teachers there have very little to work with.”

The magazine in its printed version had a circulation of 5,000 copies although these were probably copied many times as handouts in schools.

As of September, schools will be able to access it online – something which pupils are most qualified and likely to do. Content can also be projected onto a screen in the classroom.

The Face Up team are also inviting ideas and suggestions from readers and interested parties.
Ideas can be sent to: [email protected]