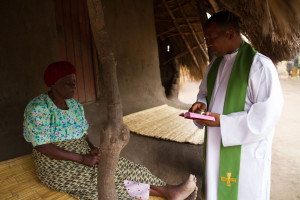 I had heard it said many times before about Africa.

“You will be shocked every day by something you see; it could be something poignant or something beautiful”.

For me, the sight of an old blind woman sitting outside her home made of mud in Malawi, receiving Communion from a priest jolted me; such was its beauty, poignancy and simplicity.

We had travelled on a World Missions Ireland trip to the stunning Central East African country and were based in the Diocese of Zomba.

Each day we accompanied Fathers Vincent Mwakhwawa and Henry Chiwaya, Pontifical Mission Societies (PMS) National Director and Diocesan Director respectively as they carried out their pastoral visits and duties in the sprawling Diocese.

They were gracious, fun and warm hosts, hugely committed to their pastoral duties; a vital cog in the chain of bringing and keeping the faith alive.

Our meeting with the blind lady, Christina, was during a day spent at the Kumpatsa Outstation Church. Now in her eighties, she was blinded by cataracts at just fifty-five and spends her days tended to by her extended family in the village she lives in.

The natural warmth and exuberance of the visiting Fathers could obviously be sensed by Christina and it was both humbling and heartening to see the dignity she was shown by them.

They spoke and prayed with her, before giving her the sacrament of Holy Communion. It struck me forcibly that this was real mission and real faith in action, both hers and theirs.

After communion, the villagers sang and danced around Christina, smiled and laughed with us, and revelled in the sense of community.

The visit to Christina’s home was just one of several we made during a particularly hot, exhausting but exhilarating day.

We had started the day at Kumpatsa Outstation Church of St Thomas where the villagers were out in force to clap and dance our arrival, giving us a welcome as warm as the sun.

Hands reached out to touch and hug us; women sang and clicked their tongues in ‘Olutation’ a unique and amazing sound that symbolises huge happiness and celebration.

The simple Church of St Thomas is the focal point for the community. It was finally built by hand in 2000, with the mud bricks collected long before that in readiness for its construction.

While it may have a tin roof that leaks during the rainy season, handmade ornaments constructed from battered old newspapers to decorate the altar, and only a handful of benches that accommodate just a fraction of the congregation, the assembled Mass-goers were just thrilled to be there; to have their Church to gather and pray. 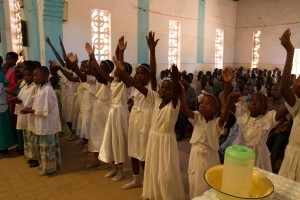 Their pride in having their own Church was so touching and genuine.

“People used to laugh at us Catholics as we only had a shed to pray in but now we have our beautiful Church” said Moses, one of the Catechists.

He happily recounts the tale of a lady who converted to Catholicism as a result of the commitment she saw.

“The Chief said the Catholics are good here; they stuck to their faith even though they only had a shed to pray in.”

The Mass was a joyful uplifting experience; singing and dancing, the congregation were alive and revelled in the Mass.

The offertory procession was unlike anything I’ve ever witnessed before. We were invited to stand at the altar and receive the gifts. What an experience!

Gifts of maize, mangos, tomatoes and eggs were presented to us as gifts as were two live chickens! This was a treat of treats!

The food was given to Fr Henry to be shared amongst his fellow priests as their food for the week with any surplus being redistributed back to the people.

In turn, we had treats of our own to give. I would never have imagined the joy and magic that little bottle of bubbles would give to the kids.

They gathered around and seemed to totally grasp the meaning of sharing, as each child would wait for his or her turn to blow the bubbles.

People, many of whom were barefoot, walked the dry dusty roads to get to the church, in some cases this involved a journey of some 20kms.

You could see how much our visit meant to those we met. They know that the Irish people have a huge gra and respect for the ‘missions’ have gone to Malawi in their droves and they enjoyed telling me stories of having tasted Irish potatoes!

The continuing prayers and financial support from the Irish public is not lost on Fr Vincent.

“I truly don’t know how we would go on without the support of the wider mission family. We have been helped enormously by our brothers and sisters in Ireland and other countries and this sustains us mentally, spiritually and financially.”

It is glaringly obvious that the Catholic Church is doing huge work in helping to combat the huge problems facing the people.

The poverty is grinding amidst the spectacular Malawian landscape. Scorched earth does not a bountiful harvest make and the people eek out their meagre supplies of maize, always running dangerously low as they anxiously await the rainy season.

While much has been done in the battle against HIV, it still remains at high levels; malaria is a constant threat and can kill in one to two days and life expectancy is just 58 for men and 61 for women.

While 80% of the schools were introduced by the Church, most have now been taken over by the Government, though with huge continuing support from the Church.

The Missionary Sisters play a huge part in the health clinics that are run on a shoestring, they prepare and cook the food distributed in schools, and they teach women how to plant and grow crops and other skills that help makes their lives a little bit more comfortable.

The pastoral visits to the sick and aged are vitally important and as one lady, Arestina, said to me, “Having the Priests here is like a visit from Jesus”.

This sentiment was echoed by Fr Vincent who stressed the importance of spreading and living the faith saying educating more religious is paramount if the faith is to strengthen and grow in Malawi.

It is only by actually going to mission countries and seeing the work on the ground that one can truly appreciate the work that is being facilitated by the Catholic Church.

The pastoral visits were just some of many hugely stirring moments during our trip. I could mention scores more.

The dignity of the lady at the Lisanjala Clinic who waited, standing in the baking heat, perspiring feverishly as she waited her turn to be given tablets to treat her malaria.

It struck me that the woman had walked several miles to the clinic in obvious distress and would have to walk home again after her treatment.

She was gracious and patient despite her distress. I couldn’t help but wonder how I would react to the same circumstances. Not well I imagine.

The Benedictine Sisters who run the clinic told me that they had run out of paracetamol as had the hospital in Zomba. This apparently is a normal occurrence. We’ve all heard of the pub with no beer but the hospital without medicine…

I think of the elderly grandmother who cradles her three month old granddaughter, Praise, in her arms as they sit in the crowded waiting room of the Pirimiti Health Centre.

The tiny baby, orphaned due to HIV, may be a carrier too. Only time will tell. Her grandmother had to hire a bicycle to bring the baby to Pirimiti.

I think of Fr Charles, the parish priest in Lisanjala Parish who delights in showing us his cow, Caroline, which he saved for ages to buy.

The milk provided by that one cow keeps him and other priests going and on Fridays he gives free milk to the nursery which is much needed and hugely appreciated.

And as we prepared to leave Malawi, my mind goes back to Christina. She would sleep on the floor in her two roomed mud house that night, like every other night. I don’t know what she had to eat that day, even if she did eat but what I do know is that the visit from Fathers Vincent and Henry that day brought light to her dark world.