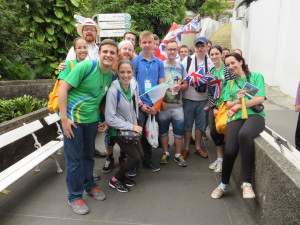 Pope Francis revealed that Krakow in Poland will be the venue for the next World Youth Day gathering will in 2016.

He made his announcement at the conclusion of the final Mass of this year’s event in Rio de Janeiro which organisers and the Vatican estimate was attended by over three million people.

In his homily, the Pope urged young people to continue their efforts to change society by fighting apathy through a Christian response.

“I ask you to be actors of change, keep overcoming apathy and offering a Christian response to the social and political concerns taking place in different parts of the world,” the Pontiff said.

He told the Church it must reflect on why it has lost so many of its followers to secularism and pentecostal faiths in recent years.

The Pontiff also told the millions of young people, who fanned out for miles along the beach, “The Church needs you, your enthusiasm, your creativity and the joy that is so characteristic of you!” 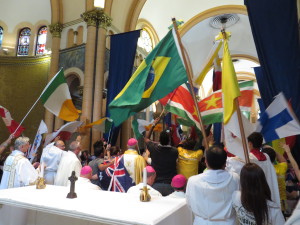 “Go and be missionaries, spreading the Good News all round the world.” Pope Francis

Pope Francis challenged young people in Sunday morning’s Mass not to be afraid and to go out and serve the very poor.

In his homily, the Pope told the millions gathered for the occasion that the best kind of witness for young people was young people themselves.

It was a challenging message, but it was one that this massive crowd on the Copacabana Beach was ready to take to heart.

It has been a week of preparation, of catechesis, liturgies and music, but above all it has been a celebration of faith.

We’ve had a flash mob with bishops, free hugs from Argentineans, and an excursion to the statue of Christ the Redeemer, whose open arms welcomed pilgrims from around the globe.

Our group, the Missionaries of the Sacred Heart, was comprised of young adults from our parishes and ministries in England and Ireland.

All told there are eleven of us, but we were part of a larger group of around 3,000,000 other pilgrims.

This week has seen young people from literally everywhere around the world coming together in Rio de Janeiro to listen to the Pope’s message and grow together in God’s love.

From the moment we touched down, you noticed the atmosphere right away. There was a sense of welcome, openness and warmth that can only be found in a Latin American country.

Language wasn’t really an issue, because with an abundance of good will and enthusiasm you can make a few words of Portuguese go a long way when necessary.

Throughout the week we met in a Church in Ipanema with bishops, priests and other pilgrims from Ireland and England. There was a great Irish representation with groups from Dublin, Ferns and Clogher.

We had talks by bishops from the UK, Nigeria and Australia that spoke of the journey of faith, our sense of vocation and our role in the Church.

It’s been a time of input, but also an opportunity for some soul searching, such as Wednesday’s reconciliation service in a parish church on the top floor of a shopping centre.

But what is it all for? What’s the point? When asked about his hope for the week Pope Francis said: “What is it that I expect as a consequence of World Youth Day? I want a mess. We knew that in Rio there would be great disorder, but I want trouble in the dioceses! […] I want to see the church get closer to the people. I want to get rid of clericalism, the mundane, this closing ourselves off within ourselves, in our parishes, schools or structures. Because these need to get out!”

It’s not enough simply to return home and leave things as they were until the next World Youth Day in 2016 in Krakow, Poland.

Pope Francis wants us to look at our world’s needs and see what our Church has to offer.

And if there’s nothing there then he challenges us to do something about it. We have something precious to share in our faith. It’s a message of peace, hope and love that needs to be heard. Yesterday doesn’t mark the end of World Youth Day celebrations – it marks the beginning. Prepare for a mess! 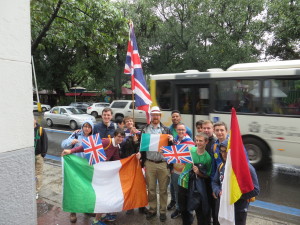