Amid Pope Francis’ speeches and apologies over Church-linked abuse, the Pontiff undertook a number of pastoral events related to the World Meeting of Families.

One of these was his encounter with 750 engaged or newly married couples from the Irish Church’s 26 dioceses.

On Saturday afternoon, following his address in Dublin Castle, Pope Francis was driven to St Mary’s Pro-Cathedral to talk to the assembled couples about one of the central themes of the World Meeting of Families – marriage.

The meeting with this cohort of young couples was organised specifically at the request of Pope Francis, according to Fr Kieran McDermott, administrator of St Mary’s Pro Cathedral.

On his arrival at the church, the Pontiff spent a few moments in silent prayer before the candle dedicated in 2011 to survivors of institutional and clerical abuse.

Afterwards, a couple celebrating their golden wedding anniversary greeted him in the name of all present. Then two couples asked the Pope some questions to which he responded. 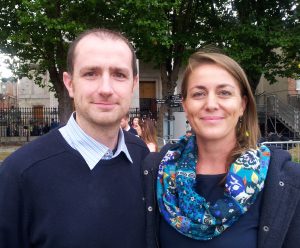 Ana Rossberg and Brian Lynch are one of the couples who took part.

Speaking to CatholicIreland.net, Ana recalled how they met.

“We met in Ireland; we trained together for our new occupation and that is where we met.”

They are getting married in May 2019. Brian explained that they got engaged last year.

Of the Pope’s address, Ana said it was “great – the atmosphere was fantastic”.

He was going off script, Brian related. “He would be reading his script and then he would look up and tell stories from his childhood.”

His message, according to Ana, “is we need a revolution of love. That really struck me, that no matter what goes on, we need to remind ourselves that love is really the most fundamental and basic thing.”

“I didn’t think I was going to get married in a church,” Ana explained. Getting engaged was such a change for our relationship – in a beautiful way – that I’m getting the courage to marry in a church.” 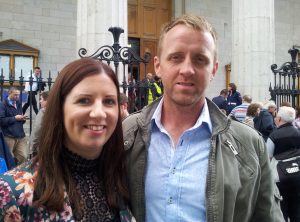 Another couple, Paul and Dolores Flanagan, married almost 12 months ago in October 2017.

According to Paul, the Pope’s dialogue with the couples was “a tremendous and beautiful occasion. We are privileged to have been there. I have admired him since he was elected back in 2013 – he is a breath of fresh air for the Catholic Church and that is definitely needed.”

The couple travelled from Kilmore diocese in order to participate.

“He seems to be very in touch with modern life – he is very normal,” Dolores observed.

Paul added “he comes across as someone who has a very open mind. He was reminiscing about how as a five-year-old boy he had noticed his parents kissing. He said it was important for children to see that affection between parents.”

According to Dolores, an occasion like this “really fills your faith”. She added, “We always wanted to get married in church – it was always important to us.”

Asked what they would take away from the Pope’s address, Paul said it was the Pontiff’s humility. “I don’t think he wants to push anything on anybody – he gives you his version and hopes you will take it on board – he is very open minded.”

For Dolores, it was his efforts to try to show that “faith is worthwhile – it is not all about rules and regulations, it is about faith and love.” 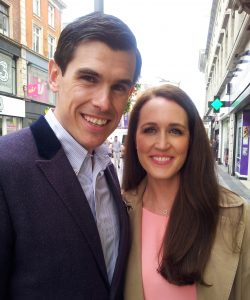 Cathal Barry and Christina Foley are getting married on Saturday in Clontarf.

They will marry in Christina’s home parish – the very church where Cathal’s parents got married 30 years ago to the month.

According to Christina, the Pope was practical in his advice and warned the couples not to let the sun go down on their rows.

“He told us not to go bed on a row but to end the conflict before bedtime so as not to wake up the next day in the middle of a cold war!”

“He speaks a lot about the whole culture of the temporary and the throwaway culture. He said he was amazed looking down and seeing so many young faces and he thanked everyone for committing themselves to marriage because in this throwaway culture the permanency of marriage was something quite radical,” Cathal said.

The communications specialist added, “I feel energised: we have obviously been working hard over the last couple of weeks for the wedding, so we were feeling quite tired but we feel more energised now after that and enlivened.”