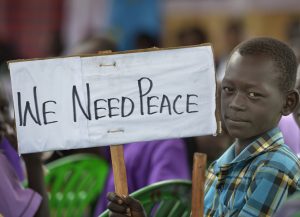 Pope Francis this week kissed the feet of Sudanese political leaders in a plea for continuing peace.

This extraordinary gesture occurred at the conclusion of a two-day spiritual retreat for peace in South Sudan, which was hosted by the Pontiff at his Casa Santa Marta residence.

The conflict between the two factions led by Mayardit and Machar ran from 2013 to last year and, before a peace deal was signed, it left 400,000 people dead.

That conflict had followed the second Sudanese civil war, which ran from 1983 to 2005 and left some two million people dead. Some sources claim more civilians have died in Sundanese civil wars than during the whole of World War II.

The Pope’s remarkable reconciliatory action is an echo of the washing of the feet ritual that will take place in churches across the world on Maundy Thursday, which this year falls on 18 April.

It is also notable that the retreat in the Casa Santa Marta was an ecumenical affair, as it was the Archbishop of Canterbury, Justin Welby, head of the Anglican Church, who first suggested that such a prayerful event take place.