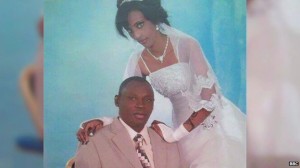 A pregnant Sudanese Christian woman has refused to renounce her faith despite an impending death sentence for apostasy.

Expectant mother, Meriam Yahia Ibrahim, was given until 15 May to convert to Islam, and that her sentence could be reduced or annulled if she did so.

The ultimatum was issued by the Public Order Court in El Haj Yousif Khartoum, Sudan.

Following her arrest on 17 February 2014, Mrs Ibrahim was subsequently charged and sentenced to 100 lashes for adultery as well as death for “apostasy” or for leaving Islam.

The sentenced was imposed under Sudan’s Penal Code (articles 146 and 126).

Meriam Yahia Ibrahim was apprehended after the Sudanese authorities became aware of her marriage to a Christian man.

Currently, she is being detained in Omdurman Federal Women’s Prison, together with her 20-month-old son, Daniel Wani.

Mrs Ibrahim was born in western Sudan to a Sudanese Muslim father and an Ethiopian Orthodox mother. She was brought up as a Christian by her mother when her father left the family when she was six years old.

She testified in court on 4 March that she is a life-long Christian, and she produced her marriage certificate that indicated she is classified as Christian.

Three potential witnesses from western Sudan who attended court to testify to her lifelong adherence to Christianity were prevented from giving evidence.

After the Public Order Court confirmed the death sentence, lawyers for the defendant asserted their intention to launch an appeal. The appeal process could take several months.

Concerns about Ibrahim’s health and welfare continue to be raised by her husband and family.

According to one family member, “we are concerned for her wellbeing; it is not very safe for her to be in the prison with dangerous criminals.”

This sentence constitutes the latest and most significant in a series of repressive acts by the Sudanese government against religious minorities.

Should the sentence be carried out, Meriam Yahia Ibrahim will become the first person to be executed for apostasy under the 1991 penal code.

Concerns have been voiced that the charge may increasingly be used against any person who converts from Islam.

Christian organisation, Christian Solidarity Worldwide (CSW), which works for religious freedom and human rights, in the pursuit of justice, learnt of the court directive.

According to Chief Operating Officer Andy Dipper, “CSW continues to call for the annulment (of) the inhumane and unwarranted sentence and for the immediate (release) of Mrs Ibrahim and her son, who is being held in violation of article 37 of the Convention on the Rights of the Child.”

As a Sudanese citizen Mrs Ibrahim is entitled to freedom of religion of belief, constitution; consequently, this sentence amounts to a violation of the Sudanese Constitution and of international conventions to which Sudan is party, including the African Charter on Human and People’s Rights.”