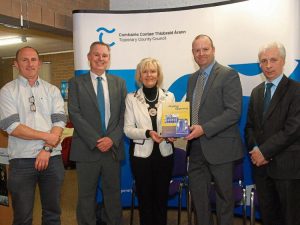 The opening of the exhibition by the chairperson of Tipperary County Council Dr Phil Bugler and Simon Mamouney, First Secretary and Deputy Head of Mission at the Australian Embassy. (pic courtesy of Tippcoco website)

An exhibition of the life of Jesuit war chaplain Fr Michael Bergin, who died on 12 October 1917 at Passchendaele on the Western Front during World War I, was launched on 4 October in Roscrea Library, Tipperary.

Fr Bergin grew up in the Millhouse of Fancroft, just a couple of miles north of Roscrea. Fr Bergin was chaplain to the Australian Imperial Forces (AIF) during the First World War. He befriended some Australian soldiers during a stint in Egypt and then joined them, first as stretcher-bearer in Gallipoli, and later as chaplain in Belgium. It was there he died from German shell-fire, one of the half-million casualties of the Third Battle of Ypres, at Passchendaele. He was also the only Catholic Chaplain serving with the Australian Forces to die as a result of enemy fire. He was awarded the Australian Military Cross posthumously.

The exhibition was curated by Damien Burke of the Irish Jesuit Archive, and was launched by Simon Mamouney, First Secretary and Deputy Head of Mission at the Australian Embassy, who was welcomed to Tipperary by the Cathaoirleach of Tipperary County Council, Dr Phyll Bugler.

The curator of the exhibition, Damien Burke, assistant archivist of the Irish Jesuit province also spoke at the event. In attendance too were Fr. Frank Sammon, a distant relative of the Bergins of Fancroft, and Marcus and Irene Sweeney, current owners of Fancroft Mill. The exhibition remains open until 31 October.

Damien Burke also marked the anniversary of Fr Bergin’s death on Tuesday, 10th  October, with a talk in Mungret Chapel, Mungret, Limerick . Fr Bergin is a past pupil of the Jesuit run school Mungret College. Appropriately, the talk was held 100 years to the day since Fr Bergin made his way to the Advanced Dressing Station of the 3rd Australian field ambulance near Zonnebeke Railway Station, Belgium. The following day he was badly wounded by German artillery fire, and a day later, 12 October, he died from his wounds. He was posthumously awarded the Australian Military Cross of Honour.

Another commemorative event relating to the 1917 centenaries, is the exhibition Jesuit chaplains and Rathfarnham Castle in the First World War, to be held at Rathfarnham Castle, Dublin. It will be launched on Wednesday, 8 November at 6.30pm by Anne Cassin of RTÉ Nationwide. Again curated by Irish Jesuit Archives, this exhibition will feature the award-winning graphic short, A Perfect Trust, by illustrator Alan Dunne. Damien Burke will give a talk about the exhibition at Rathfarnham Castle on Friday 10 November. On 27 November, at the same venue there will be an evening of First World War songs and readings. All of these events are open to everyone.