Exhibition on Jesuit chaplains in World War I opens 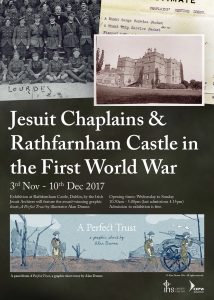 A new exhibition which has just opened at Rathfarnham Castle in Dublin explores the role and experiences of military chaplains in World War I through original artefacts belonging to Jesuits who served in the trenches.

Of the 32 Irish Jesuit chaplains who served in the First World War, on the battlefields of France, Belgium, Egypt, and Mesopotamia, four were killed: Frs John Gwynn, WilliamDoyle, Michael Bergin and John Fitzgibbon and two died from illness: Frs Austin Hartigan and Edward Sydes.

The majority of Jesuit chaplains served at the frontline with the soldiers, with intervals at Casualty Clearing Stations, field ambulances and hospitals.

Periods of leave provided some respite. The chaplain’s duties included giving the sacraments (communion, confession and absolution) saying Mass, burial, working as stretcher-bearers or medical attendants, writing to relatives of those who were killed and keeping up morale.

The most striking characteristic of the ministry was that the chaplains were alongside the troops and were exposed to the same dangers and threats.

They shared the soldiers’ lives in the trenches with the mud, rats and lice; under fire from snipers and the frequent barrage of heavy artillery. They shared long periods where nothing happened and boredom ensued. It was this apostolate of presence and proximity that won the admiration and respect of the soldiers.

Jesuit chaplains who served in the First World War didn’t regard themselves in any sense natural heroes, and their apostolates and lives were, for the most part, humdrum and ordinary. In the circumstances of war, some were transformed into truly exceptional men. For others who survived the conflict, they never recovered from their wartime experiences. 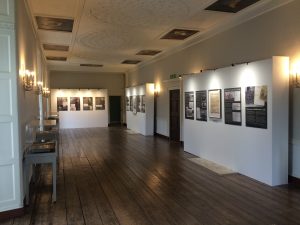 The artefacts on display at Rathfarnham Castle include Fr Willie Doyle’s blood-stained maniple, used by him to give extreme unction to soldiers at the Front.

The exhibition also displays the Dublin priest’s altar kit, including missal stand, A Kempis, altar linen, kneeler and corporal, which were used by him to say Mass as the war raged around him.

Fr Henry Gill’s scrapbook containing items collected by him during the war, including burial details of soldiers, train tickets and postcards is also on display.

The Jesuits bought Rathfarnham Castle in 1913. During the war, the castle housed Jesuits who were attending university and missioners. Four of the five chaplains profiled in the exhibition lived there before serving as military chaplains – Frs Willie Doyle, Joseph Flinn, Henry Gill and Patrick O’Mara. The Castle provided a sacred space where the Jesuits prayed and played.

He explained that artist Rita Duffy has reproduced for the exhibition a letter received by her grandmother on the death of her grandfather in 1916, written by the Jesuit chaplain Henry Gill. The letter is printed on a tea towel. 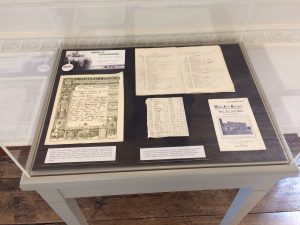 Julie Burke has reproduced Katharine Tynan’s poem, ‘The Last Parting’, which was published by the Jesuits at Rathfarnham Castle in their publication ‘The Irish Monthly’ in 1915. Tynan was from South Dublin and had two sons serving in the war.

“Many relatives of the chaplains have attended the exhibition, as have many Dubliners who remember when Rathfarnham Castle operated as a retreat house and attended retreats here,” Damien Burke told Catholicireland.net.

Jesuit chaplains served at the frontline with the soldiers. In the circumstances of war, some chaplains were transformed into truly exceptional men and for others who survived the conflict, they never recovered from their war-time experiences. In remembering them, we need to read the past with respect and to acknowledge the different traditions and loyalties.

The exhibition runs until 10 December 2017

Some Jesuit World War I Chaplains:

Michael Bergin was born in 1879 at Fancroft, Roscrea, Tipperary. Educated at Mungret College, Limerick, he joined the Society of Jesus in 1897. After two years, Michael was sent on the Syrian mission as it was thought his health would improve if he worked in a dryer climate.

He taught English in Beirut, and studied Arabic. He transferred to the French Lyons Province in order to work as a missionary in the Turkish-controlled Syrian region.

After eight years abroad, Michael began his theology studies with the exiled French Jesuits at Ore Place, Hastings, England. After ordination in 1910, Fr Bergin gave retreats and missions in England before returning to Syria.

At the outbreak of the First World War, Fr Bergin was interned, then expelled by the Turks from Syria. While in Egypt in 1915, he become friendly with with the Australian Imperial Forces (AIF), then training in Cairo.

Fr Bergin applied to the AIF however Church authorities in Australia knew nothing about this Irishman and while they procrastinated, the 5th Light Horse Regiment were dismounted and ordered to go to Gallipoli.

Evacuated back to London to recover, he visited his family in Ireland, wearing his Light Horse uniform, complete with slouch hat with emu feathers. However, ‘to all who saw him it was clear that he was really unfit for further service’. By December 1915, he was back at Gallipoli, but due to his ill health, he was transferred to hospital work.

Arriving in France in June 1916 with the 51st Battalion of the 13th Brigade, Fr Bergin lived in the front trenches, hearing confessions and celebrating Mass. He accompanied his men through the battles of Poziéres and Mouquet Farm, the advance on the Hindenburg Line and was promoted from Captain to Major.

On 10 October 1917, his battalion moved up to the Front line at Broodseinde Ridge. The next day, Fr Bergin was visiting the Advanced Dressing Station of the 3rd Australian Field Ambulance when German shell-fire severely wounded him. There are a number of different accounts of his death but he died the following day. Colonel Reilly commented, ‘Fr Bergin was loved by every man and officer in the Brigade…He was the only Saint I have met in my life.’ Fr Bergin is buried in Reninghelst Churchyard Extension, Belgium.

The citation for the Military Cross awarded posthumously but based on a recommendation made prior to his death read: ‘Padre Bergin is always to be found among his men, helping them when in trouble, and inspiring them with his noble example and never-failing cheerfulness.’

Fr Willie Doyle SJ was born on 3 March 1873 at Melrose, Dalkey Avenue, Dalkey, Co Dublin. Known as Willie, he was the youngest of seven children of Hugh Doyle, registrar of the insolvency court, and Christine Doyle (née Byrne). Educated at Ratcliffe College, Leicestershire, in 1891 Willie followed his older brother Charles into the Society of Jesus (Jesuits).

Willie taught at Clongowes Wood College, where he produced The Mikado and founded the school journal, The Clongownian. His Jesuit formation included periods in Belgium and England, and further teaching at Clongowes and Belvedere Colleges.

After ordination at Milltown Park on 28 July 1907, Willie began work as an urban missionary and retreat giver in Ireland. His positive attitude made him a great success, and he travelled all around the British Isles. He was also the author of best-selling pamphlets on retreats and vocations.

Volunteering as a military chaplain in the First World War, Fr Doyle was sent to France with the Royal Irish Fusiliers in early 1916. Within days of his arrival at the Front, he showed himself outstanding in the work of a chaplain.

Present at the battles of the Somme and Messines, Fr Doyle was killed during the third battle of Ypres on 16 August 1917, while going to the aid of a wounded man near Frezenberg. He is commemorated on the Tyne Cot memorial, Belgium.

Fr Doyle was awarded the Military Cross, and put forward for the Victoria Cross posthumously but did not receive it.

Writing to Willie’s father, Hugh, in December 1917, Major General WB Hickie remarked that: “I could not say too much about your son. He was loved and reverenced by us all. His gallantry, self sacrifice and devotion to duty were all so well known and recognised. I think that his was the most wonderful character that I have ever known.”