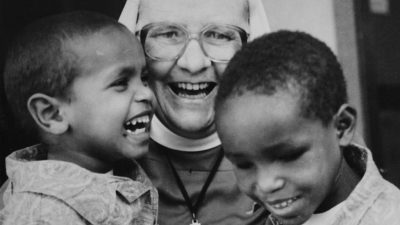 A new exhibition highlighting the contribution and legacy of Irish educators across the globe over the past 300 years opens on Thursday at EPIC: The Irish Emigration Museum in Dublin.

‘Irish Educators Abroad: Building Something Wonderful’ is sponsored by the Department of Foreign Affairs and Trade and features a number of teaching Sisters and clergymen who were pioneers in education overseas.

Dr Angela Byrne, Historian-in-Residence with the Department of Foreign Affairs and Trade, told CatholicIreland.net that the exhibition is on display in EPIC until September and it will then travel around Irish embassies abroad.

Ahead of the official launch on Wednesday evening by educator and advocate Sinéad Burke, organisers explained that the exhibition highlights Ireland’s long history of exporting male and female educators to work with communities all over the world – a tradition that continues today with English language teachers in Dubai.

The Irish had an important role in early Catholic colleges in France, Spain and Belgium.

Later, education in Ireland itself was revolutionised with the establishment of the National School system in 1830, the development of convent schools, and from 1892, the compulsory education of all children aged 6 to 14.

While many children continued to fall through the cracks, there was a notable increase in girls’ educational attainment from 1870 onwards, creating a new generation of educated and ambitious women.

By 1911, Ireland was second only to Finland in the proportion of women attending university. The combination of these factors led many Irish women to train as educators.

According to Dr Angela Byrne, Irish educators responded to the needs they identified in the different locations they went to.

“They were so adaptive to what was needed be that multi-racial schooling or special educational needs or educating girls or educating the poor or immigrant children.”

Some of those featured in the exhibition include:

– Dublin-born Sr Gabriel Hogan, who founded the first Catholic school for the deaf in New South Wales in Australia;

– Donegal-born Sr Julia McGroarty, who founded one of the first women’s colleges in the USA, as well as schools for immigrant and African–American children;

– Rev Frederick O’Neill, a Presbyterian missionary from Belfast who established girls’ schools in China and was honoured by the emperor for his services to the Chinese Labour Corps during World War I;

– and Donegal-born Sr Carmel de Montfort McAteer, who was instrumental in the Irish Religious Sisters of Charity’s decision to open Pacelli School for the Blind in Lagos, Nigeria, in 1962.

“I learnt so much from doing this exhibition,” Dr Byrne told CatholicIreland.net.

She found the variety of what these educators were engaged in impressive.

“They were at the forefront of educational provision at a time where there were very few services for some of these children and adults. They were really tuned in to what was needed.”