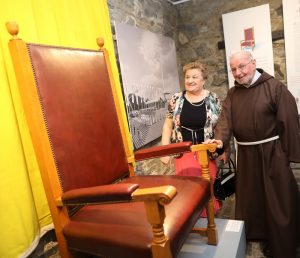 “It’s hard to imagine now as we prepare for the arrival of His Holiness Pope Francis this month, that the site chosen in the Phoenix Park for the 1979 visit by Pope John Paul II had no services – no drains, no water supply, no electricity or telephone lines,” said Kevin ‘Boxer’ Moran, Minister for the Office of Public Works and Flood Relief on Wednesday at the launch of a new exhibition chronicling the visit of Pope John Paul II to the Phoenix Park in 1979 .

“This exhibition highlights the extraordinary feat of collaboration achieved without the aid of computers, mobile phones, email, digital photography and all the other technological innovations that we have come to rely on in the 21st century.”

The Minister was speaking as a new exhibition opened at the Phoenix Park Visitor Centre, which looks at the how the largest ever public event in the country, attended by over a million people, was organised and staged in a ten-week period in 1979.

The centrepiece of the exhibition is the original papal chair, recently restored, which was made by the cabinet-making staff in the Furniture Division of the Office of Public Works (OPW) from a fallen oak tree in the Phoenix Park.

“With the advanced preparations for the upcoming visit of Pope Francis, it’s great to have the opportunity to reflect on the previous papal visit and the organisational skills required for the largest event ever held in Ireland,” said Archbishop of Dublin, Dr Diarmuid Martin.

He encouraged many people to visit the “wonderful exhibition and the recorded memories of some of those wonderful people who worked tirelessly behind the scenes to ensure the success of the 1979 Papal Mass.” 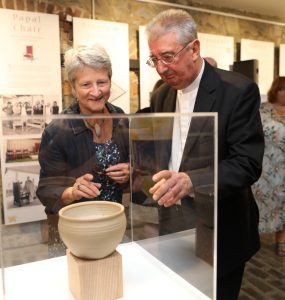 Included in the exhibition and available to view online (http://phoenixpark.ie/event/papal-visit-1979/?instance_id=3743) is a specially commissioned 15-minute film featuring some of those who worked on the papal visit, including Neil Scott, the last remaining partner of architect firm Scott Tallon Walker, which designed the outdoor cathedral, and Eithne Merrin, who worked in the Finance Department of the Archdiocese of Dublin.

On the video, she shares how those working for the finances didn’t have time to fall out. “I have vivid memories of people coming in with unopened pay packets who donated their pay packets. I’d have to issue a receipt. I’d ask them ‘What do you need [back]?’ They’d say ‘We’ll manage.’”

The challenge for architects Scott Tallon Walker was to design and construct an outdoor cathedral where more than a million people could see the altar. The original Scott Tallon Walker model of the layout, on loan from the Irish Architectural Archive, is displayed as part of the exhibition.

The papal cross was designed by engineers Ove, Arup and Partners and manufactured in Inchicore. According to the recollections of those involved, the most challenging part of the project was transporting the 116-feet-high cross from Inchicore to the Park.