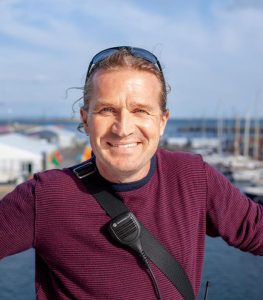 The former drummer of the popular band The Saw Doctors has shared his love story on the World Meeting of Families website.

In his testimony, Johnny Donnelly recalls how he spent the first nine months of his relationship with his now-wife Aisling planning how he would propose to her.

When they met, he was the drummer in The Saw Doctors and was travelling all of the time – “relationships were never going to work.”

Aisling was his best friend’s sister and had moved home to Galway around the same time as Johnny came back for a month’s break.

“I was never getting married, I was never having kids, but it’s an amazing moment when you know – it’s a bit like the faith that’s in you, if you have a path to follow, you know that it’s right. “

He went on tour with The Saw Doctors to America for nine weeks, and spent that time deciding on the poetry he would use for the proposal.

“I organised that the postman would deliver a letter to her, and poetry clues brought her to a field down by Lough Corrib. The passageway of six fields to the lake was lit with candles. When she got to the brow of the hill there was another poem: ‘To continue the path, be sure what you do. Because if the heart is unsure, it can be broken in two. One man is a husband, a woman a wife. From here on forever, is the rest of your life.’ In other words, don’t come down to me if you’re going to say no!”

The couple ended up building a house on the same site.

They now have four children. The youngest, Harry, spent his first two years in ICU. He had a muscular problem which according to Johnny “no one could figure out, and he would just stop breathing. He was pronounced dead on a few occasions.”

“Moments like that change your life, in an ambulance, stuck in traffic on the M50, and being told that your son has passed – that doesn’t go away from you.”

The musician states: “Faith, beliefs, all these things come into play because you realise how powerless you are. There are moments that you don’t want to live through, and you start looking for a higher something or other to get you through.”

Harry is 11 now, and according to Johnny, “he’s the happiest child you’d ever meet”.