The former Manchester United and Northern Ireland footballer, Philip Mulryne, was one of three men who made their Profession on Sunday in St Saviour’s Church in Dublin.

The former soccer winger, who won 27 caps for Northern Ireland, swapped his football jersey for a Dominican habit in 2009.

On Sunday at 11am Mass he made his Solemn Profession.

Br Philip Mulryne (38) is originally from St Oliver’s Parish in Lenadoon in Belfast.

Philip Mulryne will be forever remembered for his strike in 2001 which secured Northern Ireland a 1-1 draw away to Denmark in a world cup qualifier and ended their six-match losing run.

Br Mulryne joined Manchester United under Alex Ferguson and was part of the famed class of ‘92 featuring the likes of Beckham, Scholes, Giggs, Butt and the Neville brothers.

The Northern Irish man struggled to get Alex Ferguson’s attention with such competition in the first-team and made his international bow against Belgium in February 1997 before making his debut for United in the Coca-Cola Cup the following October.

He made his one and only Premier League appearance against Barnsley at the end of the 1997/98 season, one of three players to make his league debut with Ryan Giggs, Andy Cole, Teddy Sheringham and Nicky Butt also in the side.

In search of playing time, Mulryne joined Norwich City in March 1999, two months before the historic Treble was sealed for £500,000 and spent six years at Carrow Road.

Despite a broken leg, a Division One play-off final defeat and just a handful of Premier League appearances after the Canaries were promoted as champions in 2004, Mulryne was a fans’ favourite and made 161 appearances at the club.

Spells at Cardiff City, Ipswich, Brighton, Legia Warsaw, Barnsley and Leyton Orient followed and in 2008, with 27 international appearances to his name, he called time on his playing career.

Mulryne had been involved in various charity activities post-retirement and it is believed that Bishop Noel Treanor of Down and Connor invited him to join the priesthood on foot of his volunteer work. 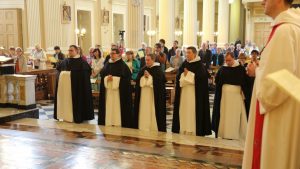 Separately, On Wednesday, the Feast of the Exaltation of the Cross, (14 September) five men received the Dominican habit in St Mary’s Pope’s Quay during the 11am Mass.

The new novices, four from Ireland and one from Trinidad, were clothed in the habit of the Dominican Order which marks their entry to the novitiate.

The Irish Dominican Province is dedicated to the Exultation of the Cross. Traditionally on this feast day the new novices receive their habits and enter into the Order.

In this jubilee year of the Order, the five new brothers are Gary Toman, Ruaidhri Grieve, Peter O’Kane, Pasi Kukkanan and Ciaran Egan. They received the habit from Fr Gregory Carroll OP.

Today, the Feast of Our Lady of Sorrows, two novices who have finished their novitiate year are due to make their simple profession.

Following the reception of the five brothers into the novitiate and the two professions today, the Irish Dominican friars will have 22 brothers in formation: six novices and sixteen brothers who are at various stages in their formation of whom two are already priests and three have already made their solemn profession.

Two of these 22 brothers are intended for the Dominicans’ vicariate in Trinidad & Tobago.

Founded in 1216 by Spanish priest St Dominic de Guzman, the Dominican Order is famed for its contributions to science and theology.