Ex BBC journalist talks about faith after the convent 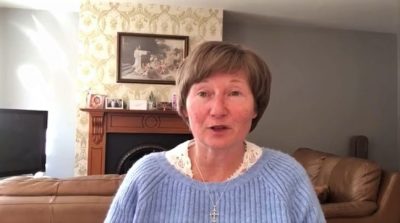 Former BBC Political Correspondent, Martina Purdy, has spoken about her shock when she realised that she and three other women who were members of the Adoration Sisters were going to have to leave their congregation because it had become too small according to Church regulations.

“A lot has happened in the five years since I last talked to you. I was then a postulant in the Sisters of Adoration on the Falls Road (Belfast) and I had just quit my job as a BBC Political Correspondent to do what I thought would have been impossible at one time in my life and that was to become a nun.”

Last September, Martina Purdy along with Elaine Kelly, who was a high-profile barrister before she joined the Adoration Sisters, had to leave their convent after five years when the Vatican decreed that the order had grown too small to meet the standards of governance required by the Church.

At the time, Sr Martina told BBC News that the situation was “deeply painful for all concerned”.

“It was not my choice to leave the Belfast convent and such a beautiful congregation,” she said and explained that she had hoped to make her final vows in 2023.

Two other women in temporary vows were also forced to leave.

Last week, in her video talk, Martina Purdy held up a photo of herself as an Adoration Sisters, as she recalled that she was then Sr Martina of the Blessed Sacrament.

“This is me living the dream. I didn’t have a perfect life but I had a very joyful life. A life of hope and a life of real meaning and purpose. I had come to know at a very deep level how much I was loved by God, that I had a share in his divine life and his divine love.”

Ms Purdy then explained, “About a year ago I got a cross I didn’t expect. I was told along with three other women that the congregation had grown too small and fragile to sustain our vocations and that in six months we would all have to leave when our vows had expired.”

“To say I was shocked was an understatement. I kind of became convinced that through faith and prayer God would save us – that it just wasn’t possible, that there would be a miracle. But, you know what, last September 23rd I left the convent. I was stripped of everything – my habit, my way of life, my congregation, my religious family, my home on the Falls Road.”

She said that by the time she left she had great peace because she knew in her heart that this was part of God’s plan for her life “even though I didn’t understand it. I knew it would have some purpose that would bear some fruit eventually”.

“But at the same time in my humanity, in my darker moments I just thought, ‘Oh My God – I have lost everything. I lost everything in one day.” She added, “I would say I am still breathing but I’ve been wiped out.”

Stressing that she hadn’t lost her relationship with Jesus, she said “that is what gets me through all the trials of life. I have learned to trust him at a very deep level. In fact that is one of the gifts I received when I left the convent, was knowing that I am totally dependent on him.”

She told those participating in the Novena of Hope that maybe that is a gift they have also received during the pandemic.

She also revealed that a week before she left the convent on the Falls Road a friend offered her a house to stay where she could pray and recover. Then in March, “a job dropped at my feet unexpectedly”.

“We have met such unusual kindness that I can see how much God’s love is lavished on me through other people. I don’t know what is going to happen after this pandemic – only God’s knows but that is good enough for me because God is love and so I’ll be taken care of.”

She concluded by reminding people that God, through the Prophet Isaiah, tells us ‘do not be afraid – I am with you, I will help you, I am holding you by the right hand.’

“So remember, hang on to that hand, pray, hope and don’t worry because Jesus loves you and he has an amazing plan for your life,” she said.