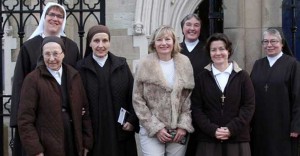 High profile former BBC political correspondent Martina Purdy has revealed that her life as a nun with the Adoration Réparatrice Sisters has come to an unexpected end because of Vatican regulations on declining congregation membership.

In a statement posted on Twitter on Monday, Sr Martina of the Blessed Sacrament explained that she and other junior professed Sisters in the congregation had been informed that they would not be able to proceed to final vows because the congregation has “grown too small and fragile to meet the standards of governance required in the Catholic Church.

“Consequently, my religious vows expired this afternoon and I am no longer a Sister of Adoration,” she stated, adding that it was “deeply painful for all concerned”.

“It was not my choice to leave the Belfast convent and such a beautiful congregation,” she stated.

The former high-profile journalist said that when she entered five years ago she had hoped and believed that she would make her final profession of vows in 2023.

“Unfortunately, the reality is that the congregation, with declining numbers, simply does not have sufficient members to enable any of the temporary professed sisters, like myself, to become fully professed. And in accordance with canon law, and following consultation with the Congregation for Institutes of Consecrated Life, the congregation of Adoration Réparatrice cannot renew my temporary vows, and I accept God’s will in this matter, in obedience and humility.”

She said the news that the temporary professed Sisters cannot continue in vows was “extremely challenging for us all and for me personally.

“I continue to follow Jesus as best I can as a lay Catholic and have now entered a period of discernment. Please pray for me and for all of us in the congregation.”

She explained that when she entered the Adoration Sisters in 2014, she believed it was for life.

“I never saw this moment coming when I would have to leave.”

Sr Elaine added, “But in accordance with canon law and the need for governance in our congregation, I now fully understand why it is not possible to continue in formation.”

She said that the call from Jesus to follow him continues in a new and fresh way and that she would take all the amazing experiences and all she had learned as a religious as she discerns the next stage of the journey as a committed Catholic.

In 1980 the Adoration Sisters, a French order of nuns, established a convent on the Falls Road in West Belfast.

In 2014 Sr Martina Purdy, a former BBC political correspondent who covered the Good Friday Agreement, shocked the media world when she quit her prestigious job and joined the congregation.

She trained along with former barrister Sr Elaine Kelly, who gave up her own law practice and took vows of poverty, chastity and obedience.

The Adoration Sisters make altar breads at their bakery in Belfast.

In its heyday, the congregation had 300 members in convents across France. Now there are just three convents in Paris, Belfast and Ferns, Co. Wexford.

In recent years four new members joined the congregation in Ireland and two others joined in Paris.

Another member of the community affected by the Vatican rules is 37-year-old Sr Máire McAteer from Aghyaran in Co. Tyrone, who first heard a call to be a nun at four years of age.