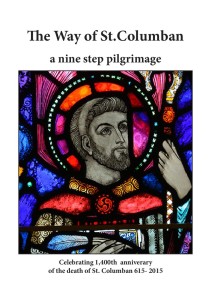 National celebrations of the 1400th anniversary of the death of St Columban will take place over the weekend 20-21 June in Bangor, Armagh and Meath.

The sixth century Irish saint is remembered as one of the greatest of the missionary monks and revered across parts of Europe.

He was born around 543 and became a monk of Bangor and later principal teacher there. In 591, desiring to ‘go on pilgrimage for Christ’, he set out with twelve companions and came to Burgundy. He established monasteries at Annegray, Luxeuil and Fontaine.

Over the weekend 20-21 June pilgrim walks and gatherings have been organised in a number of parishes and communities to honour St Columbanus.

Celebrations will centre on Bangor on Saturday, 20 June beginning with an ecumenical morning prayer service in Bangor Abbey followed by a civic reception in the Town Hall.

On Sunday 21 June a National Mass of Thanksgiving for St Columbanus will be celebrated in St Patrick’s Cathedral, Armagh at 11am with Archbishop Eamon Martin, Archbishop of Armagh.

Meanwhile, in the diocese of Meath, a Pilgrim Walk is being organised from Fore Abbey in Collinstown parish through Taghmon parish finishing at the Camino Garden outside the Cathedral of Christ the King, Mullingar.

Some have suggested that the walk would be suitable for Godparents and their Godchildren and for parish baptism/liturgy groups who wish to connect with the faith of previous generations.

The walk may be of interest to those who have taken part in the Camino de Santiago and to walking groups in your local community.

It is also a valuable opportunity for those who wish to learn about St Columban and the local monastic heritage around the area. There are some related events in the coming weeks:

A gathering for reflection, music and prayer to mark the contribution of St Columban to Ireland and Europe.

As indicated above, three parishes hosting one of several pilgrim walks around the country to celebrate the life of St Columban and the monastic heritage of North Westmeath. Pilgrim Passports for this ‘camino style’ walk cost €10. Transport from Mullingar Cathedral to Fore costs €5 and should be pre booked.

Third and Fourth class pupils and their teachers in the local schools are creating 2D + 3D exhibits on St Columban and the monastic heritage of Westmeath.

New heritage boards are being erected that incorporate the life of St Columban into the information provided in the Camino garden in Mullingar Cathedral grounds.

The Nine-Step Way of Saint Columban

Each step consists of:

The nine steps conclude with:

Pilgrims may also choose to share their reflections on local sites, songs, prayers and invocations that they consider appropriate throughout the route.

These nine steps are a synthesis of what concerns us as a Christian pilgrim people. They an integral part of every pilgrimage, whether it be to historic sites or in one’s own locality, community or parish.

For more information and more resources check www.catholicbishops.ie closer to the national celebrations in June.