Evangelii Gaudium continues to sell out 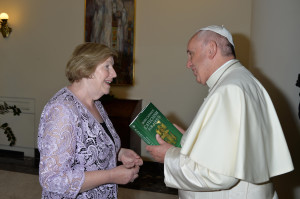 Veritas has confirmed that Pope’s Francis’ Evangelii Gaudium is now on its sixth print-run and has sold over 15,000 copies in Ireland since it was published last year.

Director of Veritas, Maura Hyland, told CatholicIreland.net that the Pope’s radical blueprint for reform and change “is the biggest selling publication in that kind of category that we have ever had.”

According to Maura Hyland, most of the sales have been individual purchases, though some orders have come through parishes.

“People are still interested in buying a copy of the Pope’s work even though they can obtain it free online,” she explained. Six hundred copies were sold in Veritas stores in June alone.

Last week, Maura Hyland was in Rome to present Pope Francis with a copy of Veritas’ newly published Irish Catholic Catechism for Adults. 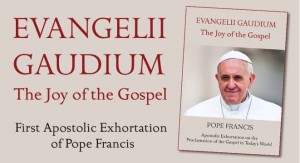 The presentation followed morning Mass celebrated by the Pope in the chapel of the Domus Santa Marta hostel, where she was one of just 50 people at the service.

Pope Francis expressed support for the Adult Faith Formation that is taking place in Ireland, Maura Hyland recalled, saying it was “very good”.

However, as his English is very limited, she said the conversation was brief.

But she explained that there was a lovely aura to the Pope. “He was very engaging and warm and he is so vibrant,” she said.

Ireland is only the second country in the English-speaking world to publish a local catechism based on the Catechism of the Catholic Church and it has already sold 2,000 copies in just two weeks.