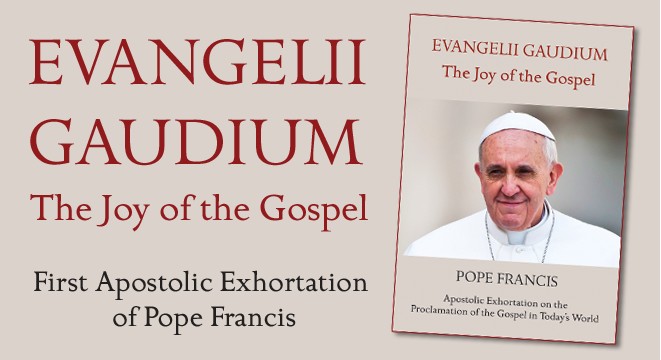 Sales of Pope Francis’ Evangelii Gaudium (The Joy of the Gospel) have surpassed all expectations with 11,000 copies sold by Veritas on the island of Ireland (North and South).

The Apostolic Exhortation by Pope Francis was published on 24 November 2013 and is now on its fourth print run.

“The sales of Evangelii Gaudium have broken records for such a publication. Heretofore, Veritas would have expected to have sold about five hundred copies of an Apostolic Exhortation. However, due to the great interest shown in Pope Francis by our customers, we planned for an official print run of 3,000 copies – and these sold out almost immediately,” Maura Hyland, Director of Veritas, said.

“Evangelii Gaudium has appeared in the list of Irish bestsellers in the non-fiction category on a number of occasions.”

She put the book’s success down to the huge level of public interest in what Pope Francis is saying and doing.

An Apostolic Exhortation is a papal document which exhorts people to implement a particular aspect of the Church’s life and teaching. It does not teach new doctrine, but suggests how Church teachings and practices can be best applied today.

Evangelii Gaudium challenges every member of the Church to ask what it means to be a follower of Christ and calls everyone to preach the good news in today’s world.

It touches on many of the themes of Francis’ papacy, including obligations Christians have to the poor, and the duty to establish and maintain just economic, political, and legal orders.

The papal document was written in response to the most recent meeting of the Synod of Bishops, which took place in the Vatican during October 2012, before Pope Francis was elected on 13 March 2013, and was devoted to the subject of the new evangelisation.

Evangelii Gaudium was also written to mark the end of the Church’s Year of Faith, which ran from 10 October 2012 to 24 November 2013.

The Catholic Herald has reported that the British publisher of Evangelii Gaudium, the Catholic Truth Society (CTS) has also sold more copies than expected – more than any other text since the documents of the Second Vatican Council.

CTS has just printed its fifth edition since the Exhortation was released last December and has sold more than 25,000 copies, the highest figure for any Vatican document since Unitatis Redintegratio, the Vatican II Decree on Ecumenism, which sold 85,000 copies in Britain.

The publisher stated that sales of Evangelii Gaudium are also higher than even the great encyclicals of John Paul II and Benedict XVI.

Many bishops have been ordering the text in bulk, but there is a mixture of people buying it.

According to Maura Hyland, Veritas is now looking forward to the publication of the Pope’s next book, The Church of Mercy: My Vision for the Church. It will be published by the Jesuit Loyola Press in Chicago and is expected to be available in the shops by early this summer.

In January this year, it was also reported by Vatican Radio that Pope Francis began “work on a draft text on the topic of ecology, which could become an encyclical.”

Fr Federico Lombardi, director of the Holy See’s Press Office, said the Pope “intends to put particular emphasis on the theme of human ecology”, a phrase used by Pope Benedict to describe not only how people must defend and respect nature but how the nature of the person – masculine and feminine as created by God – must also be defended.”

Pope Francis’ first encyclical, entitled ‘Lumen Fidei’ or ‘Light of Faith’, was released last July (2013). It completed the work initiated by his predecessor, Benedict XVI, who resigned before the document was finished.

The Apostolic Exhortation Evangelii Gaudium is priced at €4.99 and can be purchased on any of the eleven Veritas shops. See www.veritasbooksonline.ie