Home > Featured > ‘European project is not a monstrous bureaucracy’ 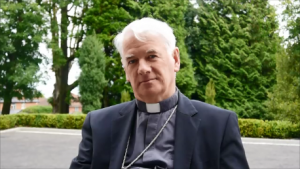 The Bishop of Down and Connor has paid tribute to the EU’s role in delivering infrastructure, mobility of capital, goods, services and people, as well as its contribution to peace in Northern Ireland.

In his homily for the annual pilgrimage to Saul, Co Down on Sunday, Bishop Noel Treanor addressed the forthcoming UK referendum on Europe which takes place this Thursday 23 June.

He said the European project with its institutions had helped transform and improve lives and societies.

Arguing that the European project “is not a monstrous bureaucracy”, Dr Treanor, who previously served as Secretary General of COMECE, said the European Parliament, the Committee of the Regions, the Economic and Social Affairs Committee, and provisions in treaties were “a serious and honourable attempt to realise that aspiration for a world governance authority at the service of the common good of the human family, set out by Pope John XXIII in his 1963 Encyclical Letter, Pacem in Terris”.

Of this Thursday’s referendum on the future of the UK within the European Union, he said many feel confused and uncertain.

“The debate of recent months has avalanched us with competing figures and viewpoints, argued with conviction and passion. To our horror we have witnessed the murder and tragic death in recent days of a young mother, Jo Cox MP, a Member of Parliament. Such an act contradicts totally the aspirations of our new Europe.”

He said greater courage was needed on the part of the political classes to communicate the achievements of European supra-national cooperation and the positive results of pooling degrees of national sovereignty to promote the common good of the peoples of Europe and of this earth.

Referring to the role of the European project in maintaining peace in Europe, Bishop Treanor said that in the aftermath of the wars of the late nineteenth century and “the horrific World Wars of the last century, an impulse of God’s grace steeled Christians, citizens of erstwhile enemy nations, to forge, as Pope Francis put it in his acceptance address on receipt of the Charlemagne Prize last month, ‘something completely new’ in human history.”

That “something completely new” was the European project, which  became the European Communities and in turn the European Union with its institutional architecture that has forged a pathway of peace and the consolidation of peace, economic development, workers’ rights and the enhancement of standards of safety, security and well-being in its countries over the past six decades.

This European project, “made up of states united not by force but by free commitment to the common good” set out and “dared to change radically the models that led only to violence and destruction.

He called for the European “community method” to be made better known to citizens, so that they understand its checks and balances, its provisions for democratic accountability and how it serves the common good of the members states and their peoples.

“The EU is battered by the tsunamis of relentless forces of change in our times like all our nation states. Its leaders have been tested by the almost indomitable forces emerging from the post 2008 financial crisis and its causes and they still try to find equitable and sustainable solutions.”

“As a group of nations the EU remains the largest donor to international development. On balance this EU, of which we are citizens, ‘demands our full quota of patience and our ongoing cooperation’. Like all human constructs it requires review, refinement and updating and over the years it has shown its capacity for development,” Dr Treanor said.

“The value of the European Union project cannot be measured in net billion gains alone; its vision for Europe’s peoples and nations and for the world, rather than billions, is its saving grace.”