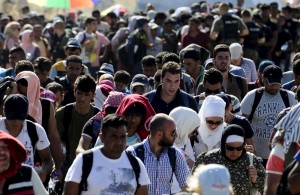 With the grim discovery of between 20 and 50 dead migrants trapped in a lorry in Austria near the border with Hungary yesterday, and thousands more migrants fleeing Syria trying to make their way across Greece and the Western Balkans, Trócaire has called on the EU to treat the unprecedented migration crisis as a humanitarian emergency.

The Catholic agency also called on the EU to commit to the provision of an urgent response that is legal, dignified and compassionate.

“The failure to adequately respond to the current mass movement of people into Europe represents the most serious displacement crisis the European Union has faced in recent times,” said Executive Director of Trócaire, Éamonn Meehan.

“If this crisis was happening in another part of the world, it would have been officially declared a humanitarian emergency by the UN, ensuring that humanitarian standards to save lives, protect those most vulnerable and reduce suffering were applied and resources made available to meet their needs.”

Almost 50,000 migrants arrived on the Greek islands in July, most of them Syrians.

By mid-August, migrants reaching Greece by sea numbered 158,000 according to the UN, while another 90,000 arrived in Italy by sea.

The International Organisation for Migration (IOM) reports that migrant deaths at sea this year passed 2,000 in August, while Frontex, the EU organisation coordinating European border management, says some 340,000 migrants have been detected at Europe’s external borders, up 216,000 in the same period last year. 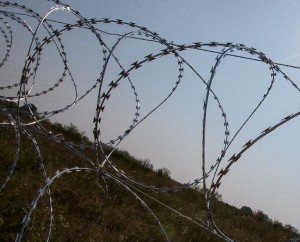 “EU Member States must honour their legal responsibility to protect refugees coming into Europe, who are risking their lives to escape the worst forms of war and oppression,” said Mr Meehan yesterday.

But EU Member States continue to disagree on coordinated action and are responding to this crisis “in terms of security and border control.

Hungary, for example, is constructing a 13-foot high fence along its 109-mile border with Serbia to keep people out,” he noted.

Increasingly desperate refugees and asylum seekers are facing heavy-handed responses in France, Greece, Macedonia and Serbia and innocent lives are being lost at sea, he said.

Yesterday, Serbia and Macedonia told a summit in Vienna that the EU had to come up with an action plan to respond to the influx of migrants into Europe.

“Unless we have a European answer to this crisis, no-one should be under any illusion that this will be solved,” Macedonian Foreign Minister Nikola Poposki told the Vienna summit.

Earlier this month, Germany said it expected more than 800,000 people to seek asylum in the country this year – more than any other EU nation. It said that refugees would be accommodated and treated fairly.

The EU tried to persuade member states to accept a quota system for taking in 40,000 asylum seekers from Syria and Eritrea over the next two years, but eventually settled on 32,500 on a voluntary basis.

Citing Article 14 of the Universal Declaration of Human Rights, Trócaire’s Éamonn Meehan said everyone had the right to ‘seek and to enjoy in other countries asylum from persecution’.

“EU Member States have a legal responsibility to grant protection for refugees, ensuring safe passage and resettlement with full respect for their basic human rights,” he said.

He called on EU member states to commit to “collective legal action to protect the rights of those who require protection, either as refugees or asylum seekers. Detention, violence and withholding access to basic assistance will not stop desperate people from trying to seek refuge in Europe”.

Éamonn Meehan said safe passage and regular channels of migration were needed as a matter of urgency.

He asked people to remember that these migrants were fleeing “lift threatening conditions”.

“In Syria over 7m people have been forced to abandon their homes and a further 4m Syrian people have become refugees in neighbouring countries. The EU should take its example from countries like Lebanon, a country half the size of Munster, which has taken in 1.5 million refugees.”