Home > News > ‘Europe is a project of reconciliation not division’

‘Europe is a project of reconciliation not division’ 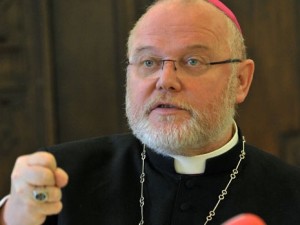 “Europe is a project of reconciliation, not division”, the President of the Commission of the Bishops’ Conferences of the European Union (COMECE) has said in a statement on the Greek crisis.

Expressing his “gratitude” to all who committed themselves to pursuing European integration, Cardinal Reinhard Marx said that despite the “unfavourable portents”, all parties involved did not abandon the pursuit of a common European solution.

Describing the negotiations as “really tough”, the COMECE president said the stakes were very high for all involved.

“There were grounds enough for engaging in a blame game. What is more important, however, is that we now look forward and think together about a common solution.”

The Church’s spokesman on European affairs sad the work ahead was “daunting and can only be undertaken by Greece with the support of its European partners”.

The vast majority of Greeks want to stay in the EU and in the Eurozone. Moreover, the other member states too want to keep Greece in the EU, he noted.

That the solution represents a classic European compromise is evidenced by the fact that in all EU countries the agreement was both welcomed and contested.

All have a vested interest in an improvement in Greece’s economic circumstances and that the common European endeavour move ahead, the German cardinal stated.

He identified the most urgent task as the restoration of the trust lost in recent months.

“In order for any further steps to be taken not only towards achieving economic and financial consolidation, but also for co-operation within Europe on other policy matters, states and governments must be able to trust one another. The classic prejudices and clichés which characterise discourse between European peoples, heightened as they have been by the overheated atmosphere of recent months, must be deconstructed and overcome.”

Cardinal Marx added that it is essential that all parties take steps to restore confidence and re-create a calmer climate in Europe, exploring a more constructive, common approach into the future.

The prelate reiterated the Church’s contentment that a European solution was reached by the heads of state and governments and that neither the wider EU nor the Eurozone risks collapse.

“And yet numerous questions remain. Is the package of solutions proposed viable? Can Greece stand on its own two feet again after meeting the requirements imposed? How do we keep the needs of the poor and the dis-advantaged within our sights?”

He urged European citizens to commit themselves to achieving success as a common enterprise.

“There are enormous challenges requiring a long-term strategy, and they can be met only by courageous and creative solutions. Up until now no serious attempt has been made to tackle the structural causes of the crisis.”

He also identified other areas which need to be addressed such as reduction of unemployment among the young, a common concern for refugees, the pursuit of peace in Europe such as in Ukraine and in Europe’s immediate neighbourhood, namely the Near and Middle-East.

It is vital that we learn lessons from the events of recent weeks and that we draw conclusions from the crisis.
The German cardinal, who is one of Pope Francis’ Council of Nine, called for a new approach to economic and financial co-operation in the EU is essential to any return to a success free of the perpetually returning threat of a currency crisis or social conflict.

“The project of European integration and unity has brought its peoples peace, security and prosperity. These successes need to be protected and to be shared by all. Europe is a project of reconciliation, not of division,” he said.

“What is now required is that all Europeans come together so that we can carry this European project forward hand in hand,” he commented and added, “It is more than just a question of the Euro.”

“It is a matter of re-kindling the European idea by setting new goals, by fresh commitment. The targets set at the moment the European Union was founded are far from being met. As Christians we commit ourselves to co-operating in making this project a reality, and we do so with profound conviction.”