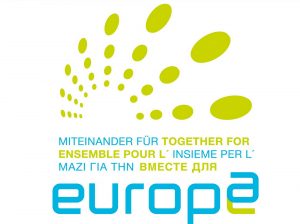 Bishop Brendan Leahy and Bishop Donal McKeown will be among 2,500 delegates at a meeting promoting unity in Europe this weekend.

Together for Europe brings together members of more than 300 communities and movements from different Churches as well as Church leaders and key figures in political, social and cultural life.

The meeting began yesterday (30 June) and concludes with a huge outdoor rally in Munich on Saturday (2 July).

Coming immediately after the passing of the Brexit referendum, the organisers believe that the conference is taking on a new, broader meaning.

“Now our ‘Together’ becomes even more a sign of hope against hope,” said Fr Heinrich Walter, from the Schoenstatt Movement.

“The Christian root is central to the issue of identity. On the historical background of this week, God himself is making Together for Europe a prophetic sign.”

“This referendum confirms that it is not politics or economics that will make a united Europe but the values shared by Europeans,” added Focolare President, Maria Voce. “Together for Europe could not come at a better time.”

Speaking from Munich, Bishop of Limerick, Brendan Leahy said the event was important as it gave people a chance to remind themselves of the bigger picture.

“The European project was established after World War II with a view to promoting peace and good inter-state relationships.”

The initial developments were around practical, concrete arrangements to do with coal and steel and the economy, he told CatholicIreland.net but the great founders of the EU – Schumann, Monet, De Gaspari, all had big ideals.

“We need to keep the ideals alive. Europe is more than the EU. Europe is the continent where Christianity first took root.”

Bishop Leahy said the presence of 300 small and large Christian communities at the gathering pointed towards “the big ideals and the deeper story that lies behind any desire for a united Europe”. 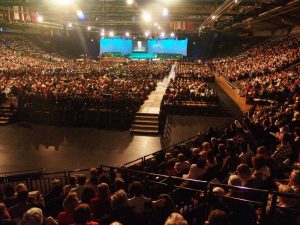 Together for Europe meeting, Stuttgart 2007

“To be a Europe of the Peoples, we need institutions and agencies but that is not enough. We need a Europe attentive to its ‘soul’, attentive to ‘values’ that animate the project. And the whole people need to be involved.”

The Pope has referred to a ‘Third World War’ happening piecemeal around the world, and yet everyone longs for a world of peace and harmony.

“We have a nostalgia for unity,” he said.

“Christians believe that since Jesus prayed for the gift of unity the night before he died, then we can proceed in the confidence that his prayer will be heard and that already every single attempt to be reconciled and build unity is itself a valuable contribution to humanity’s march towards unity.”

Together for Europe is supported by the Council of Europe and the EU Commission. Pope Francis and the Ecumenical Patriarch Bartholomew I will send personal video messages to the Ecumenical Rally on Saturday.

“It is now more important than ever that Together for Europe sends out a clear sign, a sign of communion, against the selfishness and fears of our time,” said Gerhard Proß of the YMCA and spokesperson for the initiative in Germany.

“I think it is significant that it will be Pope Francis, Andrea Riccardi (founder of the St Egidio Community) and Jeff Fountain (director of Youth With a Mission), who address the central message to Europe, and not the politicians,” he added.

Together for Europe proposes a culture of fraternity based around seven ‘yeses’: a yes to life from conception to natural death, to the family based on marriage between a man and a woman, a yes to creation defending nature and the environment, a yes to a just economy at the service of every person, a yes to solidarity with the poor and marginalised, near and far, a yes to peace and a yes to responsibility towards the whole of society so that cities become place of welcome for people of different nationalities and cultures.

“I reckon this will be a very encouraging event, and be a signpost for those searching for the deeper story that is going on in Europe,” said Bishop Leahy.

“We forget that Europe is on a journey. Like every journey there’ll be moments of apparent speedy progress and other moments of fatigue, obstacle and delay. We have to be humble and recognise there is also God who is walking with us.”

On Saturday the event will be streamed live from 12pm Irish time until 4pm at www.together4europe.org/eng/