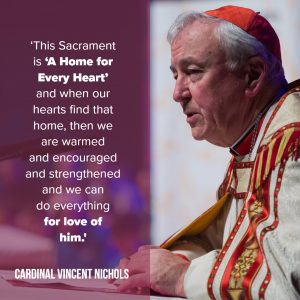 The Catholic Bishops of England and Wales have announced that the Eucharistic Congress will be transmitted live from Liverpool. At the weekend (7–9 September), live coverage of events will be broadcast by Shalom World, a Catholic television channel.

The National Eucharistic Pilgrimage and Congress, which has been given the title Adoremus, is in Liverpool and involves a gathering of clergy, religious and laity to promote an awareness of the centrality of the Eucharist in the life of the Church.

One event by Aid to the Church in Need (ACN) will involve calling on participants to “Go to Mass for someone who can’t” as an act of solidarity with Christians denied access to the Sacraments. ACN will highlight the experience of individuals who have drawn strength from the Eucharist in times of persecution.

Speaking at the main event on Saturday (8 September) in the Liverpool Echo Arena, ACN’s John Pontifex will describe how some people he met in Iraq, Syria and Nigeria overcame hatred by turning to the Eucharist.

ACN’s Marie Fahy, another speaker, has said: “If we really believe what we are taught about the power of the Eucharist and how our prayers can transform the world then why wouldn’t we sacrifice some time spent in Adoration – especially for those Christians who so often are persecuted and forgotten.”

The last International Eucharistic Congress in England was held in 1908, when permission for a public procession of the Blessed Sacrament was refused. This time, on the final day of the pilgrimage and congress (Sunday), there will be pilgrimage Masses and a street procession.

In a Pastoral Letter to the Diocese of Westminster, Cardinal Vincent Nichols wrote: “We seek to rejuvenate Eucharistic adoration in our parishes as the source of strength for our lives and for our mission, that of making present the love and compassion of Jesus in our society.”

Every diocese in England and Wales will take part in the congress and the Cardinal encouraged people to attend. Each diocesan bishop has nominated a representative who will pass on information to parishes, groups and religious communities about the pilgrimage and congress. Participants can attend the many sessions on different dimensions of the Eucharist and the daily celebration and adoration of the Blessed Sacrament.

On the first day of the congress, there will be a theological symposium, with workshops for parish catechists (especially for those involved in First Holy Communion programmes), RE teachers, hospital and prison chaplains, seminary communities and extraordinary ministers. 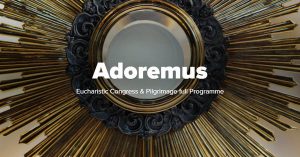 On the second day, the Echo Arena in Liverpool – which can accommodate 10,000 pilgrims – will be the home to a 6-hour stage programme, which will include a Congress Mass, keynote speakers and a drama highlighting the beauty of reverence and devotion. The day will conclude with Adoration.

On the third day, there will be pilgrimage Masses and a street procession, open to all.
A parallel programme will include talks, discussions, workshops, prayer opportunities and cultural events complementing the main events.