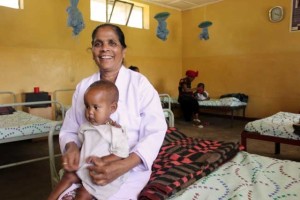 Sr Ceiline of the Maids of the Poor Sisters, who manages the Taza clinic in Ethiopia which treats between 150 and 200 patients a day, including 50 children. Photo by Val Morgan/SCIAF.

The Ethiopian Catholic Church and Caritas have appealed for aid from government and international organisations as drought in the African country worsens.

In what has been described as the worst drought in 30 years, more than 10 million people need food aid to survive and 48,000 children under five are suffering from severe malnutrition.

Sr Ceiline of the Maids of the Poor Sisters runs the Taza clinic which has a stabilisation clinic for malnourished children.

“In February and March the number of children will increase,” Sr Ceiline said. “They come from very far away. We need to give them care.”

The UN World Food Programme has been providing aid to farmers to continue to grow maize, which along with goats’ milk, feeds children.

Sr Ceiline says funding from the government and donors has enabled the clinic to help more children but far more is needed to cope with the demand.

“The situation here is very sad,” according to Sr Ceiline. “Many people have no food – they have no medicine either. When they go home from here they have nothing. When they go back they face unthinkable problems.”

The Ethiopian Catholic Church has called for urgent co-ordinated action on food aid and to ensure farmers get good quality seeds and hygienic water supplies in the worst affected regions.

“The severity of the situation is continuously increasing as is the number of people affected,” said Cardinal Berhaneyesus D. Souraphiel, the Archbishop of Addis Ababa and president of the Catholic Bishops’ Conference of Ethiopia. 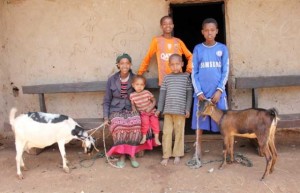 Woltelserhun Aoane’s children were treated at the Taza Catholic Church clinic for two months. With WFP aid, she and her husband have been able to grow maize and to feed the children. Photo by Val Morgan/SCIAF.

Caritas Internationalis has launched an appeal to help the most vulnerable on behalf of Caritas Ethiopia.

Cardinal Souraphiel said the emergency response was not only about providing emergency food assistance but helping to protect livelihoods and keep families together.

Caritas Ethiopia has been working with diocesan offices to conduct food security assessments in different parts of the country since May 2015.

It is also working with other Catholic Church agencies and other organisations to identify those most in danger from malnutrition, particularly young children.

Oxfam has also launched an appeal for funds for Ethiopia stating that many are walking for two days to get water for their families and animals.

The charity stated that the Ethiopian government estimates that 10.2 million people will need humanitarian assistance this year, at a cost of $1.4 billion.

The El Niño weather system, on the back of 12 to 18 months of erratic or failed rains, has caused the drought.

It has caused food shortages in southern Africa, Papua New Guinea and Central America, but also floods in Paraguay and Bolivia.

According to Nigel Timmins, Oxfam’s Humanitarian Director, “People are watching their crops wither and their animals starve to death all the while knowing they don’t have enough food and water themselves.”

“The Ethiopian government is doing its best but the scale of the problem requires urgent and significant funding from donors to complement the government’s efforts. It’s been clear for months that this drought would have a devastating effect on Ethiopia. More needs to be done to help the country cope.”

Oxfam is helping over 160,000 people in three areas of the country by trucking in water, repairing boreholes and wells, and giving out animal feed.

Ethiopia’s ‘belg’ rains are due to begin in a couple of months but even if normal rainfall occurs, it will take time for people to replenish their herds and cultivate crops.