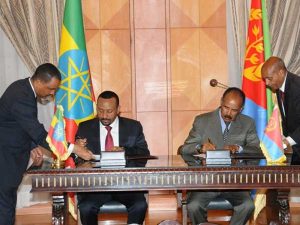 The agreement was signed by Eritrean President Isaias Afwerki and Ethiopian Prime Minister Abiy Ahmed on Monday at state house in Asmara, the capital of Eritrea.

Last Monday 20 years of hostility between the African nations of Ethiopia and Eritrea came to an end.

The Prime Minister of Ethiopia, Abiy Ahmed, and the President of Eritrea, Isaias Afwerki, signed a declaration at a summit in Eritrea’s capital, Asmara. The summit marked the first time an Eritrean president and Ethiopian prime minister had met for nearly two decades.

The peace deal restores diplomatic relations and normal ties between the countries. Airlines will fly between their capitals and Ethiopia, a landlocked country, will be able to use Eritrea’s ports once more.

“Perhaps most important of all, the border will be demarcated. This won’t be an easy task,” said Martin Plaut, senior research fellow at the Institute of Commonwealth Studies, University of London. “Populations who thought themselves citizens of one country could find themselves in another. This could provoke strong reactions, unless both sides show flexibility and compassion.”

Ethiopia and Eritrea have been bitter enemies for decades, fighting a border war in 1998-2000 that cost nearly 80,000 lives.  According to Mr Plaut, some of the first moves towards peace came quietly from religious groups. In September 2017, for example, the World Council of Churches sent a team to see what common ground there was on both sides. In addition, he says, the American Assistant Secretary of State for Africa, Donald Yamamoto, has played a major role.

Welcoming the peace agreement, the Secretary General of the World Council of Churches (WCC) said that while observing “with great joy this moment of peace, we also pause to mourn the lives of the tens of thousands of people who have been killed in the conflict.  We encourage the churches to be engaged in the implementation of the peace process,” said Rev. Dr Olav Fykse Tveit.

Both countries have much to gain from peace. Carol Morgan, regional director for Horn of Africa with Concern Ireland, which has projects in six regions of Ethiopia, told CatholicIreland that when the war broke out after Eritrea got independence, a lot of people who had businesses or family on both sides had to leave. “And now they can be reunited.  People are phoning, they’re communicating with each other. They re-established communications and now the fact that flights are also being re-established is very positive.”

The two parties have to work out the main area of contention around a town called Badme, she said. 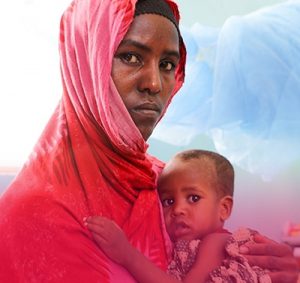 “A key thing for Ethiopia is around access to the ports because Ethiopia is a landlocked country. At the moment they rely on Djibouti in Somalia and I think to have another option in Eritrea will put Ethiopia in a very strong position…they have to import so much food aid and fertiliser seed – they are so dependent. I think that will be extremely positive,” Ms Morgan said.

Ethiopia’s prime minister only took office on 2nd April, and one of his first actions was to release political prisoners.  Ms Morgan was in Ethiopia around this time. “I think when the prisoners were released, it was like a weight had been lifted.  People are very positive and just felt happy with the new leadership.” She said there is great hope for the future.

“We’re not seeing visibly the impact [of peace] yet. We’ll see that at a later stage, but I think in general people are really hopeful. The ordinary people always wanted this peace. They see Eritreans very much as brothers.”

Ethiopia has a population of more than 100 million. Due to severe drought in 2017, over eight million people in Ethiopia do not have enough food and over 350,000 children under five are at risk of severe malnutrition.