Home > Featured > Environmental action on the agenda at Knock on Saturday

Environmental action on the agenda at Knock on Saturday 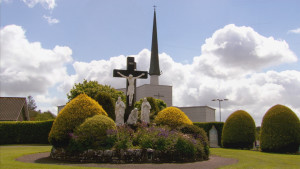 The shrine in Knock, Co Mayo.

Ireland’s national Marian shrine at Knock, Co Mayo, will host an exploration of the Papal encyclical Laudato Si’ next Saturday.

Held under the title “There’s no Planet B”, the event at the St John’s Centre runs from 9.30am to 2.30pm, and will be followed by a celebration of the Eucharist in Our Lady’s Basilica.

The morning will feature presentations by guest speakers Trócaire’s head of policy and advocacy, Lorna Gold, and the former president of Mater Dei, Fr Dermot Lane.

Ms Gold is the author of Climate Generation: Awakening to Our Children’s Future. She has taken a lead role in getting the Catholic Church in Ireland to divest from fossil fuels, is a member of the International Commission for an Economy of Communion and is a member of the Irish government’s Ministerial Advisory Group for the National Dialogue on Climate Action.

Fr Dermot is regarded as one of Ireland’s foremost theologians and is author of several publications including Catholic Education in the light of Vatican II and Laudato Si’.

After the two make their presentations, there will be a discussion of some of the issues raised and other matters of concern relating to climate change and the growing environmental despoilment of the planet.

Earlier this month a United Nations’ report warned that some one million species are threatened with extinction because of humankind’s detrimental activities. The report said the global response to the catastrophe being created by climate change has been totally insufficient so far.

After lunch, there will be a series of presentations from community groups on what they are doing in their locality to alleviate climate change and to respond to Laudato Si’, the Pope’s environmental plea to all of humanity. Throughout the grounds of the shrine there will be pop-up eco displays.

There is no charge for this event, which is part of the celebrations marking the 140th anniversary of Our Lady’s apparition, but donations are welcome.