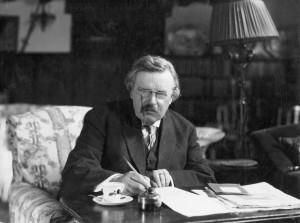 An English writer who sparred verbally with Oscar Wilde and George Bernard Shaw and who was recently quoted in the abortion debate in Ireland is being considered as a possible candidate for sainthood.

A Catholic bishop in England is seeking to open an investigation into whether GK Chesterton could be made a saint, the American Chesterton Society’s national conference heard recently.

Dale Ahlquist, president of the Chesterton Society in the US, said that Bishop Peter Doyle of Northampton is “sympathetic” to those who desire to see Chesterton canonised and is seeking a suitable priest to begin an investigation into the potential for opening a cause for Chesterton.

Chesterton lived from 1874 to 1936. Thanks to his wife Frances, he became a devout Anglican Christian. He later converted to Catholicism in 1922.

His short stories include the Father Brown mystery series, and he influenced the thinking of many converts and writers, including C.S. Lewis.

Ahlquist said Chesterton was “an articulate defender of the Catholic faith” and “very prophetic.”

“He definitely saw what’s going on in our culture with regard to the attack on life, the attack on marriage, and the huge economic disparities that exist,” he said.

“Chesterton seems to get it right about all those things. But he does it with joy, with charity, and with goodness, without banging the table of condemnation,” Ahlquist told the Catholic News Agency.

The writer’s connections with Ireland are numerous. One of his famous characters, the detective-priest Fr Brown, was based on an Irish Catholic priest Fr John O’Connor who received Chesterton into the Catholic Church in Battersea, London in 1922.

In a small book on the subject titled Christendom in Dublin, he wrote: “Nobody who was been in Dublin for a week as I have been during the Eucharistic Congress can doubt that Ireland is passionately religious; and especially that the Irish populace is passionately religious…. Nobody who has lived in England all his life, as I have lived in England, can doubt that modern England, with its many manly and generous virtues, has become largely indifferent to religion.”

In the recent abortion in debate in Ireland, Chesterton was quoted in a letter to the Irish Times by retired priest, Fr Michael G Murphy from Cork who wrote, “The abortion Bill before the Oireachtas is a concoction of the Cabinet, embellished with a false sense of urgency.”

“The unbending parliamentary process applied to the Bill is causing crises in the political parties and in society; crises that could have been avoided had we a more flexible process,” he added.

“In 1911, GK Chesterton pointed to the flaw in the old British process; the one the Cabinet here is now enforcing.

The letter writer noted that Chesterton wrote, “Our representatives accept designs and desires almost entirely from the Cabinet class above them; and practically not at all from the constituents below them. I say the people does not wield a Parliament which wields a Cabinet. I say the Cabinet bullies a timid Parliament which bullies a bewildered people . . . If you ask me why we have thus lost democracy, I say from two causes (a) the omnipotence of an unelected body, the Cabinet; (b) the Party system, which turns all politics into a game like the Boat Race.”

“The British parliament has wisely made its procedures more flexible since 1911, for instance allowing for a free vote on major issues.”

Chesterton’s cause for canonisation may have gained a boost from Pope Francis’ election.

The Chesterton group in Argentina stated that when he was Archbishop of Buenos Aires, Cardinal Jorge Bergoglio, encouraged them in their aspiration to see the initiation of the Cause of Chesterton.

Cardinal Bergoglio, who was elected as Pope Francis on March 13, approved the text of a private prayer for the canonisation of Chesterton.