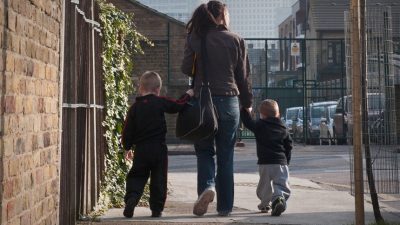 The UK’s two-child cap on social welfare payments is having ‘devastating consequences’, say the Catholic Bishops of England and Wales, who have joined forces with the Catholic Union of Great Britain in calling on the UK’s new Chancellor of the Exchequer, Rishi Sunak, to scrap the limit.

Congratulating Mr Sunak on his recent appointment, Bishop Richard Moth of Arundel and Brighton, who is chair of the English and Welsh Bishops’ Social Justice Department, wrote to the Chancellor saying that Catholics in the UK were encouraged by the manifesto promises made by the Conservative government to tackle child poverty through tax and benefits.

“Pope Francis reminded us last year that ‘poverty is not inevitable’,” wrote Bishop Moth in the letter, which is also signed by Nigel Parker, director of the Catholic Union which promotes dialogue between faith and politics.

Their letter continues: “Policies rooted in social justice can help the poorest children in our society to flourish and reach their true potential. The forthcoming Budget [on Wednesday 11 March] presents an opportunity to help more than half a million of these children by abolishing the two-child limit for Universal Credit and Child Tax Credit.”

This is not the case in the UK where, since April 2017, there has been a two-child cap on the amount of financial support given to parents in receipt of payments under the Universal Credit system.

The policy is deliberately designed to discourage low-income families from having more children, the UK Work and Pensions Secretary Ian Duncan Smith told the 2015 Conservative Party Conference. “The limit is about bringing home to parents the reality that children cost money and if you have more kids you have to make the choices others make and not assume taxpayers’ money lets you avoid the consequences of such choices,” he said. “That’s taking responsibility, and that’s fair.”

However, the Catholic Union strongly disagrees, with spokesman James Somerville-Meikle commenting: “If the Government is serious about helping families and levelling up society, then getting rid of the two-child benefit cap would be a good place to start. This deeply unfair policy leaves larger families worse off for no good reason.”

The cap affects all third and subsequent children born after 6 April 2017, with two exceptions: if a third or fourth child is the result of a multiple birth, ie a twin or a triplet, they will qualify for Universal Credit payments, as will a third or subsequent child born to a mother because of rape.

Nearly 600,000 children in 161,000 households in the UK no longer qualify for Universal Credit payments, according to a UK Department for Work and Pensions report published last April. The report noted that the number can only increase as the policy has only been in effect for three years and more children continue to be born.

In Northern Ireland alone, 5,000 households are affected by the policy.

“Catholic charities across England and Wales have first-hand experience of how the limit can put essentials such as food, rent and utility bills beyond reach, with devastating consequences for children’s wellbeing and life-chances,” said Bishop Moth in the letter to the Chancellor of the Exchequer.

Last year, a Church of England report, published in conjunction with the Child Poverty Action Group (CPAG), found that not only was the policy increasing the level of hardship suffered by low-income families, it was also causing many women to consider terminating their pregnancies with an abortion.

“The impacts of this policy are currently being felt by families from all walks of life,” wrote Bishop Moth.

“Most are in work and many fell upon hard times after having their children. It also affects refugee families given sanctuary in our country and has a disproportionate impact upon religious minorities.”