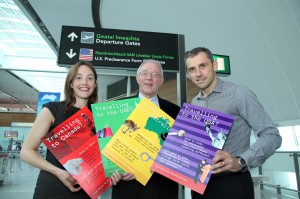 The Chair of the Irish Episcopal Council for Emigrants has appealed to the faithful not to get bogged down with facts and figures when discussing emigration but to remember the human face of migration.

In a statement accompanying the Episcopal Council ‘emigrants pack’ which has been issued for St Patrick’s Day, Bishop John Kirby warned that emigration continues to have a dramatic effect on Irish society as thousands of people travel abroad in search of new opportunities, leaving behind loved ones and creating a void in Irish families and parish communities.

“It is our hope that as the Irish economy improves there will be a focus on job creation so that those who were forced to emigrate will have the opportunity to return home,” he said.

In his statement, Bishop Kirby said that the Irish Church and people must continue to reach out to those who are affected by migration.

“As we prepare to celebrate St Patrick’s Day, we remember and pray for all Irish people overseas, those who have left our shores for the first time and those who have been away for many years,” he said.

He urged people to also remember the families that have been left behind and pray that they will find strength and comfort as they cope with the pain of separation.

“We also remember those who have travelled from foreign lands to begin new lives in Ireland. We pray that they will receive the same welcome that we would wish for our own emigrants far from home.”

Referring to Pope Francis’ message for World Day of Migrants and Refugees, Bishop Kirby said the Pontiff reminded us that ‘migrants and refugees are not pawns on the chessboard of humanity. They are children, women and men who leave or who are forced to leave their homes for various reasons, who share a legitimate desire for knowing and having, but above all for being more’.

“Pope Francis also highlights the importance of creating better economic and social conditions at home so that emigration will not be the only option available to people: ‘The creation of opportunities for employment in the local economies will also avoid the separation of families and ensure that individuals and groups enjoy conditions of stability and serenity’.”

Last year marked the tenth anniversary of the Pontifical instruction Erga Migrantes Caritas Christ (The Love of Christ towards Migrants).

This document highlights the fact that nearly every country is now affected by migration and that faced with the vast movement of people, and the phenomenon of human mobility, ‘faith reminds us how we are all pilgrims on our way towards our true homeland’.

A report released by the Central Statistics Office (CSO) in August 2014 found that Ireland continues to experience net outward migration, albeit at a lower level than the previous year.

There has been a slight increase in the number of people immigrating to Ireland this year at 60,600 (up from 55,900 the previous year). Of these, 19.2 percent are Irish citizens.

Emigration continues to have a profound effect on Irish society as many well-educated, enthusiastic young people travel abroad in search of new opportunities.

The Episcopal Council says that the ‘emigrants pack’ is aimed at those considering emigration to help them prepare for the experience.

“This information pack also aims to make emigrants aware of the importance of taking care of their mental health. For many people, living abroad will be a very positive experience but others may struggle with feelings of isolation and find it difficult to ask for help. Drug and alcohol abuse, depression and suicide are serious issues that affect Irish communities overseas.”

The Irish charity Console reported that its British helpline receives hundreds of calls annually from Irish immigrants who were deemed to be at immediate risk of taking their own lives.

The Council for Emigrants said it hoped that the information provided in the pack will help raise awareness of the supports that are available for Irish emigrants and encourage people to talk about this issue.

Through its chaplaincies overseas, the Council for Emigrants provides pastoral outreach to Irish emigrants as they strive to build a new life for themselves far from home.