Elphin priest appointed to role at Irish College in Rome 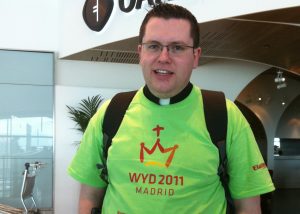 A young curate from the diocese of Elphin has been appointed as Director of Formation at the Pontifical Irish College in Rome.

Thirty-six-year-old Fr John Coughlan will take up his new role next summer.

Between now and then, he will remain in St Joseph’s Parish in Boyle, Co Roscommon.

A native of Riverstown Parish in Elphin Diocese, Fr Coughlan was ordained to the priesthood in 2008 following seven years of formation at St Patrick’s College, Maynooth.

He has previously served as chaplain at Sligo IT and as a curate in Athlone and he is currently a member of the Elphin Diocesan Vocations Team.

He completed his License in Theology (a third-level teaching qualification) with First Class Honours in 2015.

According to a statement issued by the Catholic Communications Office in Maynooth, the trustees of the Pontifical Irish College asked Bishop Kevin Doran to release Fr Coughlan for his new mission earlier this month.

His new role will see him take a share in the responsibility of helping young men from all over Ireland to prepare themselves for the priesthood.

The Congregation for the Clergy – the Vatican Department responsible for seminaries – has just published The Gift of the Priestly Vocation, a new set of guidelines for the formation of priests.

Announcing the appointment on Monday, Bishop Doran said “The Pontifical Irish College has played a very significant role in the history of the Irish Church, and has provided priests for Ireland for almost four hundred years.

“Fr Coughlan’s appointment is our way of saying that the Diocese of Elphin believes in the future of the priesthood. We hope that, in the coming years, we will be able to send seminarians both to the Irish College and to Maynooth.

“I will be happy to meet any single man from the age of eighteen upwards who is on a journey of faith and who is open to considering the possibility of a vocation to the priesthood in the Diocese of Elphin. It is a decision I made myself almost fifty years ago and one which I have never regretted.”

Many Elphin priests have studied at the Irish College over the years. Bishop Dominic Conway was rector of the College in the 1960s and Bishop Doran served as spiritual director there from 1990 to 1995.

Four Irish diocesan priests make up the staff of the College: Mgr Ciaran O’Carroll, who is rector; Fr Paul Finnerty, who is vice-rector; Fr Tom Norris, who is spiritual director; and Fr Hugh Clifford, who is currently director of formation.