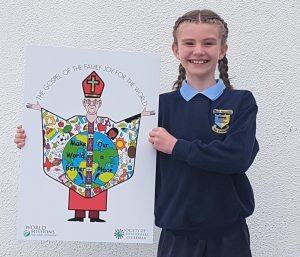 Jane Boland with her winning entry for the Papal vestment design competition.

One of the first surprises today in Pope Francis’s visit to Ireland was a gift of an ecclesiastical robe designed by 11-year-old Jane Boland from Nenagh, Co Tipperary.

The colourful and unusual robe was designed by Jane as part of an art competition organised earlier this year by the Society of Missionary Children.

“We were totally overwhelmed by the response to the competition and the reaction since,” said Julieann Moran, the society’s national director. “We were expecting to receive 200 or 300 entries, instead we got 4,500. And Jane was such a worthy winner. Her design shows that she understands what the World Meeting of Families is all about, and it’s also a great celebration of childhood.

“It’s unlikely that the Pope will wear the vestments while he is in Ireland – all kinds of official vestments have been organised for that well in advance – but it would be great if he wore them to a children’s Mass in Santa Mara some time,” said Ms Moran

Originally, the first prize was a family ticket to the World Meeting of Families, but the prize has been significantly upgraded since. “We sent Jane’s design off to Solivari in Bergamo in Italy and they have done a fantastic job in producing exact replicas of Jane’s design,” said Ms Moran.

“Then the World Meeting organisers said they would like Jane to present [the garments] to the Pope when he arrives at Dublin airport. So she and her two brothers, Daniel and Tom, aged seven and 11, and their parents, Ruairí and Maura, are among the official greeters when Pope Francis arrives in Ireland.

“I am delighted for Jane and her family, but I am also delighted for the Society of Missionary Children, as the Pope is our patron and this is our gift to him,” Ms Moran said.

The Society of Missionary Children, also known as the Pontifical Association of the Holy Child, aims to encourage children to provide charitable assistance to other children in foreign lands. Founded in France in 1843, it has been active in Ireland since 1853. Today, the society provides educational material to schools, encourages children to pray for other children and to share whatever they can, no matter how little. The charity’s motto is “Children helping children”. It is active in more than 100 countries.