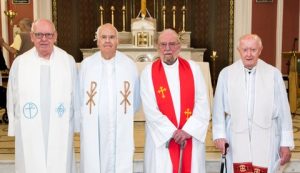 An Italian who moved to Ireland and joined the Spiritans here was among eight missionary priests who marked the 60th anniversary of their ordination last Saturday.

Fr Enzo Agnoli moved from Italy to Ireland with his family and both he and his late brother Savino became Spiritan priests for the Irish province.

Assigned to Nigeria in 1957, Fr Enzo Agnoli initially served in education. After the Nigerian Civil (Biafran) War, he moved to Brazil and later to Canada.

Fr James Duncan is from Co Antrim and also began his ministry in Nigeria in the mid-1950s.

After the war, he ministered in the 1970s in Angola and, later, in Papua New Guinea. The last Irish Spiritan to serve in Ghana, he ministered there from 1980 until returning to Ireland in 2014.

Fr Gerry Foley has been based in East Africa since 1957. From Co Wicklow and a brother of fellow Spiritan Fr Paddy who ministered for over five decades in Nigeria, Fr Gerry has served in pastoral and rural development roles in Kenya and more recently in Uganda.

Fr Seán O’Shaughnessy is a native of Kinsale. He ministered in Kenya for over twenty years before returning to Ireland in 1980. Fr Seán then taught for over a decade in St Mary’s College, Rathmines and worked in hospital chaplaincy before retiring to Kimmage in 2000.

Among the many others marking special anniversaries at the Kimmage celebrations on Saturday were silver jubilarian Fr Maurice Shortall from Co Kilkenny who is one of four Irish Spiritans based at the Congregation’s Rome headquarters, and Dubliner Fr Phil Doyle who had returned from his mission in Australia to mark his golden jubilee.