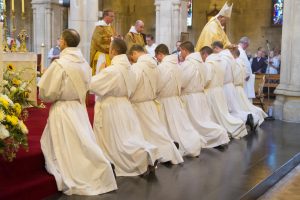 In the year that the Dominican Order worldwide is marking the 800th anniversary of its foundation, the Irish province rejoiced this weekend as eight friars were ordained to the priesthood.

Archbishop Robert Rivas, a Dominican who serves in the Diocese of Castries in the Caribbean, presided at the ceremony in St Saviour’s Church in Dublin’s Dominick Street.

Archbishop Rivas is part of the Irish Dominican province.

2016 is a special year for the entire Dominican Family as it celebrates the 800th anniversary of the founding of the Order of Friars Preachers.

According to Constantine of Orvieto while St Dominic was praying at the Basilica of St Peter in Rome, he saw the Apostles Peter and Paul approaching him. St Peter handed him a stick, and St Paul a book and said to him, “Go and preach, because you have been chosen by God for this ministry.”

In the opening ceremony for the Dominicans jubilee, these elements of Dominican iconography – the stick, the book and the apostolic mandate – were incorporated in the overall theme for the celebrations: “Sent to preach the Gospel.”