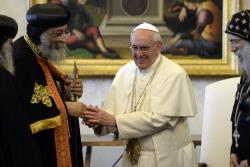 The Coptic Orthodox Church has opened a process similar to canonisation for the 21 Egyptian Christians murdered by Islamic militants in Libya last week.

Pope Tawadros II has stated that the names of the martyrs will be inserted into the Coptic Synaxarium, which is similar to the Roman Martyrology and to canonisation in the Latin Church according to Vatican Radio.

On hearing news of the murders, Pope Francis telephoned Pope Tawadros to express his “profound sympathy in the pain of the Coptic Church for the recent barbaric murder of Coptic Christians by Islamic fundamentalists.”

Pope Francis assured his prayers and stated that on day of the funerals of the victims, he would unite spiritually to the prayers and the sorrow of the Coptic Church, in the celebration of the morning Eucharist.

The two met in May 2013 when Pope Tawadros was on a visit to Rome.

At that time Pope Francis said the future of Egypt and the role of its Christian communities finds a deep echo in the heart of the entire Catholic world. 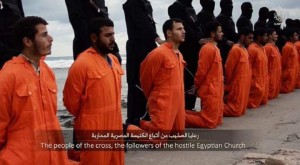 Militants of the Islamic State released a video of the beheading of the men, some of whom were seen praying the words “Lord Jesus Christ” moments before their death.

Bishop Giovanni Martinelli has remained on in Libya in spite of the killings and other persecutions. He remains to support his ‘flock’ which includes a handful of Filipinos working in the hospitals as nurses.

“We have become orphans of the ambassador who has left,” he stated in an interview with New City Online. “We are here because Jesus wants us here. I am at the service of this population.”

He stated that the Christian communities remaining in Libya are “fine” and that in his area they had celebrated Mass. He said they felt God is with them so they had no need to fear.

According to Bishop Martinelli they had not been threatened directly. However, he said they could also be beheaded and he stated that he is ready to die for his people.

He cautioned against “political visions that do not belong to these people,” and urged the international diplomatic corps to do its best to unite the country.

“If one comes here only with arms and without a strong will to dialogue, it would be useless,” he said.

“One must come only if pushed by the desire to dialogue with the Muslims. I am here for this, and not for anything else.”

In Egypt, the resolve of Christians has been strengthened by the murders in Libya according to Coptic Catholic Bishop Youssef Aboul-Kheir of Sohag.

He said in an interview with Aid to the Church in Need that the guest workers in Libya “suffered a holy death with prayers on their lips. They went to their deaths just like the early Christians.”

The Islamic State released a video of the executions on 15 February – the day that Egypt’s Coptic Catholic Church celebrated the consecration of its first-ever church in Sinai, in the community of Sharm El-Sheikh.

The church is known as Our Lady of Peace: a name chosen by Suzanne Mubarak, wife of former Egyptian president Hosni Mubarak.

She was educated by Catholic nuns and personally ensured that construction of the church could proceed after years of delay.