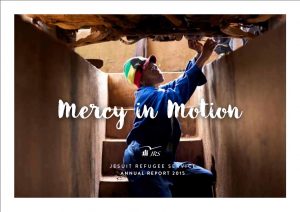 This is according to the JRS Annual Report 2015 in which Fr Thomas H Smolich SJ, JRS International Director stated: “Remember that the word educate is rooted in the Latin educere, to draw out, to lead forth. JRS education seeks to do just that; it aims to draw refugees holistically, communally, intellectually and practically into a world where their lives are valued and their skills and hearts make a difference.”

In 2015 JRS committed to education in the Global Education Initiative and the launch of the Mercy in Motion campaign.

At the end of 2015, Pope Francis endorsed such projects and initiatives and projects in line with the Holy Year of Mercy, and stated that education not only provides a future for young people, but also protection: “Your Global Education Initiative, with its motto Mercy in Motion, will help you reach many other students who urgently need an education that can keep them safe,” he said.

The JRS Mercy in Motion campaign aims to help 100,000 more young refugees to get an education. 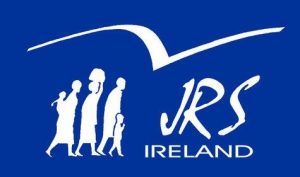 In Ireland JRS has called for improvements to the direct provision system. It also facilitates language classes for adults and Christmas presents and Easter Eggs for children of refugees living in Ireland.

The annual report, which covers the international work of JRS, stated that 21% of JRS’ global expenditure in 2015 went toward educational services. As well as providing long-term education and psychosocial support, JRS also provides emergency relief in hard-to-reach areas such as inside Syria. JRS works with local lay, Jesuits and other religious communities to provide services where other organisations cannot reach.

For example in Syria, JRS continued to operate in Damascus, Homs, and Aleppo. In Damascus and Homs, JRS offered children a safe space where they could come together to learn and play, to build their self-confidence, and to express themselves about the trauma of the war. Supplementary schooling was offered through afternoon tutoring and literacy classes.

In Lebanon, JRS organised education activities  and school meals for more than 2,000 children at centres in Mount Lebanon, Bekaa, Baalbek, and Beirut. Youth and adults attended Arabic, English, and computer courses, as well as vocational training, and psychosocial support was also incorporated.

25% of JRS’ global expenditure in 2015 went toward emergency relief, comprising 48 percent of the people served. Approximately 300,000 of the displaced persons JRS serves were internally-displaced Syrians.
Even in hard-to-reach places, JRS prioritises education as well. JRS teams comprise and serve people of all faiths and backgrounds and see education as a tool for to reconciliation and peace building.

“Education will bring peace to my country, because as soon as students are educated, they will know their rights, and they will know how to bring peace through the pen and negotiation table,” said Leila, a student of the JRS teacher-training programme in Maban, South Sudan.

In 2015, peace agreements were broken in South Sudan. Maban County, in Upper Nile State, served as an intersection of sanctuary for not only the 130,000 refugees fleeing from Sudan but also for tens of thousands of internally displaced.

In 2015, JRS partnered with another faith-based organisation and with county officials to transform a formerly occupied learning centre into a teacher-training college (mentioned by Leila above).