Ecumenical service of thanksgiving for sports 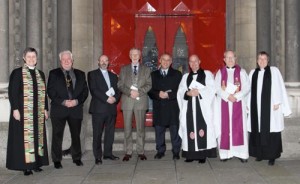 The value and importance of all sport at all levels was highlighted on Sunday at the 66th Annual Ecumenical Service of Thanksgiving for the gift of sport.

The service took place in St Ann’s Church, Dawson Street, and was addressed by former Ireland and Lions rugby player, Tony Ward, who spoke of his life-long involvement in sport.

The church was packed for the service which was also attended by Cllr Larry O’Toole, representing the Lord Mayor of Dublin, along with the presidents of many school unions, secondary school students and people from the world of sport.

He said the beauty of sport was its unpredictability – anyone could have their place in the sun if they tried hard enough and put in the work.

The former Munster player said it reflected values which were important in life, that you get out if it what you put in. It also taught people to win and lose, to respect the opposition and your teammates and respect the referee.

He added that the weekend’s Six Nations win for Ireland was very special, as well as being dramatic and unpredictable.

“What a great day for rugby and sport in general and Ireland. It was spectacular,” he said.

Mr Ward praised the humility of Ireland’s head coach, Joe Schmidt and captain Paul O’Connell who, he said, were the same in victory as they were in defeat.

In a message to parents, teachers and coaches, the former out–half urged them to be conscious and sensitive towards children in their formative years. He said they must accentuate the positive and encourage children even when they make mistakes.

Tony Ward concluded by underlining that no one sport is the greatest sport.

“Sport, like beauty, is in the eye of the beholder – whether that be hurling or rugby or tiddlywinks. We’re here tonight united in thanksgiving for the gift of sport, whatever sport that is,” he said.

The annual Ecumenical Service of Thanksgiving for the Gift of Sport began 66 years ago following discussions between the Rev George Crummy and Bob Graves, Irish rugby international.

The service focuses on thanksgiving for all men, women and young people whose lives have been enriched and blessed by the gift of sport, whether through active participation, patronage or through the medium of radio, television or attendance at events.

The congregation was welcomed to the service by Canon David Gillespie, who was joined by fellow clergy from the Methodist, Presbyterian and Roman Catholic Churches including the Rev Yvonne Ginnelly of St Ann’s, Fr Michael Foley of St Mac Dara’s College in Templeogue, the Rev Alan Boal of Abbey Presbyterian Church and the Rev Vanessa Wyse Jackson of Rathgar Methodist Church.

During the service, lessons were read by the President of the Association of Schools’ Unions, Desmond Campbell and Heatley Tector who represented YMCA Cricket Club.

Musical accompaniment was provided by the Alexandra College Choir under the direction of Dervla O’Sullivan.