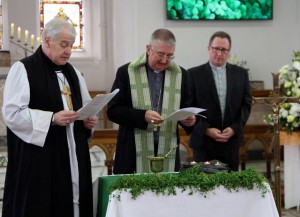 St Patrick speaks of three things which remain at the heart of spiritual content today, the Church of Ireland’s Archbishop Michael Jackson of Dublin said in his sermon at a special ecumenical service to bless the shamrock ahead of St Patrick’s Day.

The Church of Ireland Archbishop said the three were the importance of God and the Trinity; the triumph of good over evil; and autobiography as a vehicle of spiritual and personal expression.

He was joined by Archbishop Diarmuid Martin of Dublin for the ceremony at the new Dublin Institute of Technology Campus at Grangegorman for the pre–St Patrick’s Day event.

The service was held in St Laurence’s Church on the campus and was the first such ceremony to take place on the campus. Shamrock was distributed to students, staff and visitors afterwards.

The event was a joint venture between Fr Alan Hilliard, Coordinator of DIT’s Chaplaincy Service and the Rev Rob Jones, a Church of Ireland Chaplain at DIT.

Speaking about the service, Fr Hilliard commented, “This ceremony highlights our rich Irish heritage which is of interest to our increasingly diverse campus population and those of Irish heritage”.

In his sermon, Archbishop Jackson spoke of the myth and history of St Patrick.

The cult of the country’s patron saint had gone viral, he said, from the Anglo–Normans decision to transfer his remains to Downpatrick, surviving the Protestant Reformation and the iconoclasm of Cromwell, to the 20th century when Ronald McDonald served green milkshakes and the 21st century when cities compete to go green for St Patrick’s Day and the selfie reigns supreme.

It is almost as if the spin sustains the spirit of St Patrick, the Archbishop suggested.

“You will almost always find someone over–dressed as a bishop in a parade, a float or a display on St Patrick’s Day – and, of course, wearing green vestments. You will also find a hazy notion of someone who cast out snakes from Ireland and marketed the shamrock theologically,” he commented.

“The issue of spin is both an interesting and a dangerous place for Christian people to find themselves. In marketing terms, it is ‘to die for’ because everybody knows about it when we speak of St Patrick, the snakes and the shamrocks; while in religious terms, it can so easily leave us with the wrapping paper and nothing inside it because the whole festival is so successful and unstoppable that there is little, if any, need for the strictly spiritual or theological content any longer,” he added.

The ceremony took place in St Laurence’s which functioned as a church for the many residents of Grangegorman Hospital over the years. St Laurence’s continues to serve the new and emerging community in the area.

“The aim of the chaplaincy is to offer a space in St Laurence’s where people from various ethnic and religious backgrounds can celebrate their various national and religious festivals in the future thus giving them a sense of being ‘at home’ in a new location,” Fr Hilliard explained.

He added that, “Over the next number of years we will see some 2,000 students living on campus and every effort will be made through a range of activities by various college based groups to accommodate and enrich the students overall educational experience”.