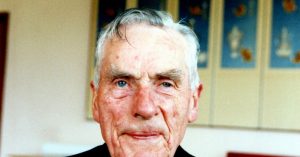 One of the country’s best known environmentalists has paid tribute to a priest who this week became the first member of the Columban order in the country to celebrate his 100th birthday.

One hundred years ago Fr Dan Fitzgerald SSC was born in Cork City on 28 June 1916.

He was educated by the Christian Brothers at Sullivan’s Quay in Cork. In 1933, he entered St Columban’s, Dalgan Park in Shrule, Co Galway, and was ordained there in December 1939.

Paying tribute to his fellow Columban, Fr Sean McDonagh SSC, who is a native of Nenagh in Co Tipperary where Fr Dan finished his ministry, described the centenarian as an ‘extra-ordinary’ priest.

“Fr Dan’s daily communion rounds were legendary. He brought my own mother communion every day for the last six-and-a-half years of her life when she was house bound,” Fr McDonagh recalled.

Fr Fitzgerald came to Nenagh in 1989 after serving in the Philippines during World War II and later in the diocese of Hanyang in China.

He left China in 1952, but during all his life he continued to be interested in China and, especially what was happening in the Church there.

In the 1950s, Fr Dan worked in Australia and later Scotland before returning to Ireland.

Speaking about his time in Nenagh in Co Tipperary, renowned environmentalist Fr McDonagh said “During his 23 years of service, Fr Dan visited the hospital every night. Almost every family in North Tipperary has some story to tell about meeting Fr Dan on nightly rounds.”

“I remember my own mother being rushed into Nenagh hospital. I received a call to come home as they thought my mother was dying. When I reached the hospital it seemed that she was dying. It was only after Fr Dan’s visit that I wondered whether her potassium levels had fallen. If fact, her potassium levels had fallen. The procedure to address that helped save her life.”

Speaking about his commitment to the sick, Fr McDonagh said “Not alone the patients, but all the hospital staff valued Fr Dan’s contribution to healing in the hospital.”

In an email to Fr Donal Hogan (who at the time was the Columban Regional Director) in March 2012, Fr Pat Malone, the parish priest of Nenagh wrote, “Fr Dan is deeply loved, highly respected and greatly valued by the whole community.”

He wrote that 21 nurses were willing to organise a rota to look after Fr Dan’s medical needs.

He concluded, “Fr Dan has lived a long and very fruitful life as a Columban missionary. On the occasion of his 100th birthday, we thank God today for his life and the way his life has touched and enriched all of ours.”