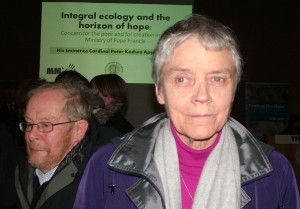 There is an awakening to ecological conversion in the Catholic Church, but it needs to grow according to Sr Catherine Brennan SSL, Catholic representative of Eco Congregations Ireland.

Speaking to CatholicIreland.net following the 2015 Trócaire Lenten lecture by Cardinal Peter Turkson entitled, Integral Ecology and the horizon of hope: concern for the poor and for creation in the ministry of Pope Francis, Sr Catherine said Pope Francis was giving a great impetus to eco awareness which was was growing in Ireland.

“I think the statements Pope Francis has made already have been very encouraging. At last we’re hearing some really strong statements about the protection of God’s creation which I have never heard before in the way he’s saying it.

Eco Congregations Ireland is an ecumenical group promoting environmental awareness in all the churches, in all the denominations.

“We promotes an eco approach to worship, lifestyle, property and finance management in parishes and churches, with an outreach to community and the developing world,” said Sr Catherine.

To parishes, they propose, as a first step, a ‘Churches’ Environmental Check Up’.

This can be downloaded from their website (www.ecocongregationsireland.com under resources) and consists of a series of questions.

Module one, for example, looks at prayer and worship, asking questions like: “In your church’s prayer life do you – Praise God the Creator? Say sorry for the harm done to the environment?”

Parishes that take the ‘Check list’ and its suggestions for improvement seriously, can apply for an Eco Award.

So far one Catholic parish (Inchicore) and one Catholic diocese (Kerry) have won the awards. All of the other denominations have won two awards each.

To win an eco award a parish must include creation in prayer and worship; do something practical like growing, recycling or developing an allotment, and have a community and overseas outreach.

Inchicore parish, which is run by the Oblate Fathers, got its Eco Award in 2012.

“My hope is that with this new eco awareness in the Catholic Church, every parish in the country will become an eco congregation,” says Sr Catherine. 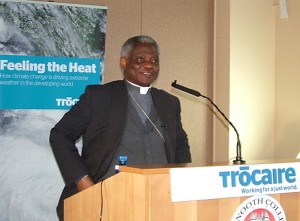 She is concerned, however, about the way Pope Francis much anticipated encyclical on the environment will be received.

Asked about this, Cardinal Turkson said that it would depend on local churches.

“We [in Rome] produce outline study guides, but it is a matter of subsidiarity,” he told a packed Renehan Hall in St Patrick’s College Maynooth on Thursday night.

Sr Catherine thinks priests in formation need to be in touch with a good theology of creation.

“They are the future priests of our church and if they don’t have a good theology of creation I wouldn’t have much hope for how the encyclical will be promoted in Ireland in the future.”