Home > News > Echoes of IEC2012 at ‘Faith of our Fathers’ conference

Echoes of IEC2012 at ‘Faith of our Fathers’ conference 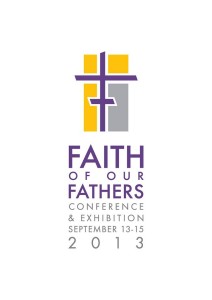 Archbishop Diarmuid Martin will address the subject of the New Evangelisation at a conference which boasts six speakers a day, a range of workshops and more than 70 different exhibitors showcasing catholic services and products.

Bishop Seamus Freeman of Ossory will preach at the opening Mass of the ‘Faith of Our Fathers Conference and Exhibition’ in Kilkenny this weekend.

The event is taking place just after the first anniversary of last year’s International Eucharistic Congress (IEC) and within the Year of Faith.

Its template is the IEC mix of speakers, workshops and exhibitors all under one roof in a show of new confidence in the catholic community going beyond the challenges of the recent past.

“IEC2012 created a buzz and a confidence. It was the first time the Church showed itself to be confident in renewal after years of challenges”, Anthony Murphy, organiser and editor of the Catholic Voice newspaper told CatholicIreland.net.

He said he and others involved in the conference wanted to link it with the first anniversary of the International Eucharistic Congress as well as doing something to celebrate the Year of Faith.

“We hope people who attend deepen their own faith and faith journey and that we give them a vibrant conference which shows that the Church here is already in renewal and is growing and is approaching the year ahead with confidence,” he added.

There were several hundred advance bookings at the time of going to press but with tickets still available at the door, this figure is expected to rise.

“We anticipate it will be well supported,” Anthony Murphy said. “It is a first, but organisers are open to running another one if that is what people want us to do, but we’ll have this one first.”

The themes of the conference are the liturgy, family and life, faith formation, Marian shrines, catechism, Eucharistic miracles and Catholic education. Well known speakers will cover many aspects of the Catholic faith.

On Friday afternoon, Archbishop Diarmuid Martin of Dublin will speak on, ‘The New Evangelisation in a New Ireland.’ He is leader of one of the first dioceses in the coutnry to set up an Office for Evangelisation.

Irish Times columnist, John Waters, will speak on ‘The Crisis of Reason’ in Ireland on Sunday afternoon.

In addition to the main addresses on each day of the conference, there will also be a range of workshops.

One workshop involves young boys from Meath who will forsake their Saturday football to run a workshop to share their understanding of Eucharistic adoration with others.