Sierra Leone may be on course for zero Ebola cases 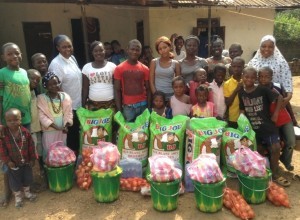 Supplies for five families in Kenema in Sierra Leone

“We see a people traumatised, stigmatised, orphaned, widowed, unemployed, dependent, vulnerable and needy,” Sr Linda Ugwu of the Missionary Sisters of the Holy Rosary in Sierra Leone has stated in her report on the fall-out from the Ebola crisis.

Elsewhere in her report, Sr Ugwu explains that “Most survivors are afflicted with painful side effects from the medication administered to them and the after effects of the virus.”

Ebola sensitisation workshops for academic and non-academic staff of Holy Rosary Secondary School in Kenema and St Paul’s Primary School as well as psychosocial support training for all the teaching staff and supplying vital food to survivors are the most recent interventions against Ebola in Sierra Leone.

Sr Ugwu explains that the Missionary Sisters of the Holy Rosary opted to bring hope and consolation to those afflicted by the deadly virus. “We did this relying on the grace of God, and the support of our benefactors and our various donors.”

As well as providing training in the handling the psychosocial effects of Ebola, Misean Cara has helped fund adequate security personnel to safeguard school property at a time when social structures have broken down and theft is widespread.

Construction of two incinerators, a school canteen and a drainage system to fight against health hazards within the school have helped maintain good hygienic and sanitary conditions that will further check the spread of the virus.

Misean Cara and the Missionary Sisters of the Holy Rosary are among the many charities and aid agencies from all over the world helping in the fight against Ebola and in rebuilding in its wake. 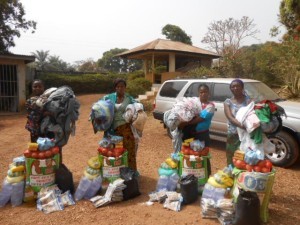 The international community is working towards zero Ebola cases in West Africa, but must also work with Guinea, Liberia and Sierra Leone to address the underlying causes of the crisis according to the UN’s development chief, who spoke at the Ebola Conference hosted by the EU in Brussels last week.

“We must ensure recovery efforts address the drivers of the fragility which produced the crisis, including by building resilient institutions and systems and improved services, and by prioritising human development and citizen empowerment,” said Helen Clark, Chair of the UN Development Group.

She added that while comprehensive, long-term development was important, it was imperative now to define and meet urgent recovery needs.

These include provision of social protection and psycho-social support for Ebola survivors, orphans, and other vulnerable groups; restoring basic health services; providing a safe school environment for the return of students; restoring and creating jobs; and ensuring the wave of empowerment of local communities in the response to Ebola is sustained through community dialogue, participation, and decentralised governance.

She also cautioned that the epidemic was not yet over, and that there can be no complacency until there are zero cases.

“The international community must stay the course on getting to and staying at zero, as well as supporting those affected by the disease,” she said.

The disease has killed thousands of people and left many more without close family members and caregivers.

It has also affected economic sectors in the three most affected countries, doing considerable damage to economies that were growing at encouraging rates only a year ago.

The countries’ governments have been making plans, for example Liberia’s Agenda for Transformation, Sierra Leone’s Agenda for Prosperity, and Guinea’s Poverty Reduction Strategy have set out development aspirations.

However, despite these strategies and priorities, the immediate needs are also huge. Agriculture, construction, mining, and the service sectors have been badly disrupted.

Businesses and SMEs have suffered from the downturn. Private investment and trade, the cross-border trade traditionally dominated by women, have been severely depressed. There has been widespread loss of jobs and livelihoods.

The Brussels Conference participants hoped its deliberations would help set the scene for and contribute to building the bridge which leads from the emergency response to Ebola to longer term development.