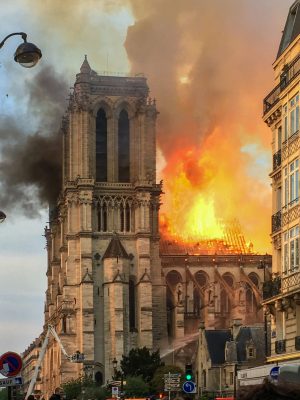 Another view of the inferno at Notre Dame de Paris (Pic Le Laisser Passer A38, Wikicommons)

All churches celebrate the Resurrection of Our Lord, but the Cathedral of Notre Dame de Paris has a particular link with the Passion of Our Lord, both real and symbolic, recalled Archbishop Eamon Martin of Armagh in his Easter homily.

The Catholic world was shocked on Monday by the fire that destroyed the roof and spire of one of the world’s most famous churches, a building that attracts 13 million visitors a year.

Fr Jean-Marc Fournier, a chaplain with the Paris fire brigade, les Sapeurs-Pompiers, was able to work with fellow fire officers to rescue some of the cathedral’s most precious relics and treasures, including a relic that is said to be the Crown of Thorns worn by Jesus at his crucifixion.

Another national treasure was also saved from the blaze. When the cathedral’s spire collapsed, the weathervane at its summit fell away from the flames rather than into the inferno and was later found damaged but intact. The weathervane, shaped like a cockerel and containing relics from several French saints, is seen as a symbol of France.

In his Easter homily, Archbishop Martin said: “As flames engulfed the beautiful Cathedral of Notre Dame ‪on Monday evening last, a local priest spoke of his great sadness at the destruction, but, seeing how much had been saved – including the Blessed Sacrament and the treasured relic of the Crown of Thorns – he also expressed his unspeakable joy which he put down to his hope of the Resurrection.”

The Archbishop said during Holy Week Christians mark, in prayer and in worship, the two great pillars of our faith – the Cross and the Resurrection of Christ. He said at this time of year the media often feature stories about relics such as the Shroud of Turin, the Crown of Thorns, the True Cross and the Veil of Veronica.

But he said the most vivid and tangible way to understand the mystery of Holy Week and Easter is to search for Jesus in the real-life experiences of people who face the Cross of suffering while sharing the hope of Resurrection.

“The Cross of Good Friday continues to cast a long shadow in the world – from the hungry and thirsty lands of South Sudan and Yemen, to those still fleeing from violence in Syria, to those caught up in natural disasters like the recent cyclone in Mozambique,” he said.

“And we can all think of people much nearer home for whom the agony of the Cross is very real. This weekend I have been praying in particular for the loved ones and colleagues of the talented young journalist, Lyra McKee, whose life was so cruelly and pointlessly ended by violence in my home city of Derry. May Lyra rest in peace.

“If the story of salvation had ended on Good Friday, we would remain a people of despair, crying out as Jesus did on the Cross, ‘My God, my God, why have you abandoned us?’

“On this Easter Day I pray that we can be ‘Easter People’ – like the early Christians – capable of bringing the joy of the Resurrection into our troubled world. Everywhere around us people are crying out for a reason to live in hope. Our mission, as Easter people, is to work for the restoration of hope in society; to be a positive and charitable presence in our communities, especially with the suffering, homeless, migrants and poor.

“We are called to be reconcilers and peacemakers, willing to help heal the wounds of the past in our families, society and Church; to be comforters, reaching out to those who feel abandoned or in despair with the Good News of Easter hope,” the Archbishop said.