‘Early doors’ in Ireland as Jubilee Year of Mercy ends 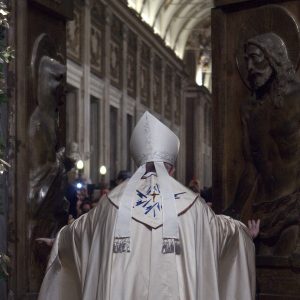 The Jubilee Year of Mercy began on the Feast of the Immaculate Conception, December 8, last year, which was the 50th anniversary of the closing of the Second Vatican Council. The aim of the Year of Mercy was to allow Catholics around the world to focus on mercy, compassion and forgiveness.

When Pope Francis marked the beginning of the Jubilee Year by opening a Door of Mercy at Saint Peter’s Basilica, he said: “How much I desire that the year to come will be steeped in mercy, so that we can go out to every man and woman, bringing the goodness and tenderness of God. May the balm of mercy reach everyone, both believers and those far away, as a sign that the kingdom of God is already present in our midst.”

As with all Jubilee years, a Holy Door was opened in St Peter’s Basilica. Pilgrims passing through the door could receive a plenary indulgence subject to fulfilling a number of other requirements within 48 hours, including receiving the sacrament of reconciliation and the sacrament of the Eucharist. 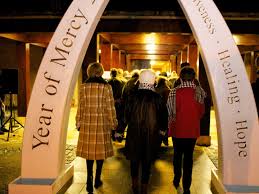 Holy Doors of Mercy were also opened in all 26 of Ireland’s dioceses, in cathedrals, in other significant churches, such as St Peter’s, Drogheda, and in places of pilgrimage such as Lough Derg and Knock. During the year, the faithful were invited to make a pilgrimage to a Holy Door of Mercy and to cross its threshold. Crossing the threshold of a Holy Door is a sign of the passage from sin to grace.

Doing something ahead of the main event is known in football slang as ‘early doors’, which is what Irish dioceses are doing by closing their Holy Doors ahead of the sealing of the Holy Doors in St Peter’s Basilica, Rome. Across the globe, Holy Doors in cathedrals and churches will be closed this fortnight to mark the end of the Jubilee Year.

The Catholic press office in Maynooth says that Irish dioceses have embraced the Holy Father’s Year of Mercy. This has offered many opportunities for people to be part of the Jubilee Year and to share what Pope Francis referred to as the “balm of mercy” .

There were celebrations for the ‘24 Hours for the Lord’, in which the faithful had opportunities to avail of the sacrament of reconciliation any time during this 24-hour period.

Archbishop Eamon Martin, Archbishop of Armagh and Primate of All Ireland, offered an opportunity for people to share works of mercy and to be missionaries of mercy in an initiative called ‘Be Mercy Ireland’.

Other Irish dioceses offered pilgrim walks at various stages during the year, created new prayer booklets for parishioners, and offered lectures on the theme of mercy. Dioceses also availed of the opportunities offered by the Year of Mercy to promote the sacrament of reconciliation.

As well as making the pilgrimage to local Holy Doors of Mercy, many pilgrims from around the world travelled to Rome to complete ‘The Walk of Mercy’ and to enter through the Holy Door at Saint Peter’s, and through Holy Doors at three other basilicas in Rome.

By June of this year, it was reckoned that more than nine million pilgrims had travelled to Rome to pass through the Holy Doors of Mercy of the Eternal City.

For details about events in your diocese marking the end of the Jubilee of Mercy, please see www.catholicnews.ie