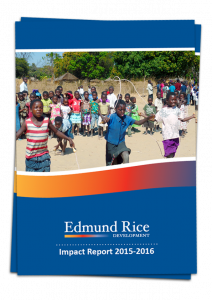 Edmund Rice Development (ERD) helped more than 40,000 people with funds of over €2 million in the 2015–2016 period, according to its latest Impact Report.

ERD is a development agency established in 2008 in Ireland by the Congregation of Christian Brothers and governed today by an independent board of directors.

Thanking donors, funders and supporters for their part, Jenni Barrett, Chief Executive of ERD, said that “The impact of the work outlined in this report would not have been possible without the deep commitment of our valued partners in mission – the many Brothers, educators, development workers and staff whose dedication is humbling to witness.”

She said ERD looks forward to continuing to work together with partners and supporters “for the liberation of people and communities around the world.” 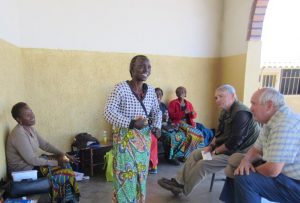 Brs David and Donal during immersion experience in western Zambia

For over 200 years, education has been the focus in the tradition of Edmund Rice, but change is under way. Globally, the Edmund Rice Mission is focusing on what it describes as the “liberation of people and communities” through community engagement, education and advocacy.

The report states that 2015–2016 was a time of significant change and transition for Edmund Rice Mission.

They have learned the language, become integrated into the local communities and begun to engage with local people to identify the root causes of social problems in this first phase of the programme. More clusters are being formed in northern India in 2017.

“ERD will ensure people living in poverty are at the centre of everything we do and every decision we make,” stated Matt Breen (outgoing Chair of ERD) and Jenni Barrett in their introduction to the report. (Mr Breen retired as chair of ERD in 2017 and Mr John Cooley has been appointed in his place.)

Governance was improved and ERD is formally “on the journey” to full compliance with the Governance Code for Community, Voluntary and Charity Organisations in Ireland.

The Impact Report shows the many ways that ERD has spent funds from private donations and agencies like Misean Cara.

It has spent €1.1 million on 28 education projects, benefiting 19,550 people. For example, it has been involved with the Fe y Alegría school in Peru for 20 years. In South Africa Edmund Rice Camps offer young people the opportunity ‘just to be kids’ and a safe environment to help with self esteem and skills training in an environment where up to 50 percent of 15- to 24-year-olds are unemployed or have had no access to education in the past. 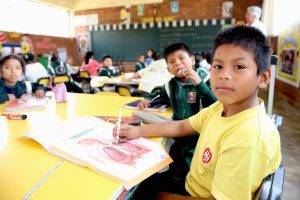 It spent €195,024 on 6 projects in community engagement, benefiting 13,657 people – for example, through access for children to school in Zambia.

It spent €371,131 on 3 advocacy projects, helping 7,775 people. This involved raising awareness of social justice issues and human rights. In India Edmund Rice International has helped with the ‘Nine is Mine’ movement formed by the children of India to advocate for their own rights as children.

The name comes from the demand that the Indian government honour a promise to allocate 6 per cent of GDP to education and 3 per cent to health, which comes to 9 per cent in total, hence ‘Nine is Mine’.

The  spend on capacity building was €330,744 for 6 projects, helping 385 people – for example, through the income-generation programme at Education for Life, Kenya.